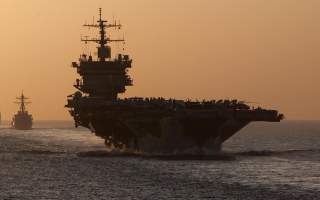 On Apr. 14, 1969 a North Korean MiG-21 shot down an unarmed EC-121 propeller-driven aircraft which was on a routine reconnaissance patrol over the Sea of Japan from its base at Atsugi, Japan. The entire 31-man crew was killed. U.S. response was to activate Task Force 71 (TF-71) to protect such flights over those international waters in the future. Initially, the TF-71 consisted of the carriers Enterprise, Ticonderoga, Ranger, and Hornet, battleship New Jersey, 3 Cruisers, and 16 destroyers. The elements of the task force rendezvoused at a point known as Defender Station in the Sea of Japan east of South Korea.

USS Enterprise was operating on Yankee Station in the Tonkin Gulf in support of U.S. Forces conducting the war in Vietnam. I was attached to Enterprise as the Assistant Combat Information Center (CIC) Officer. Rear Admiral Malcom Cagle and his staff were aboard Enterprise at the time and Admiral Cagle was designated Commander Task Force 71 (CTF-71). My boss, the CIC Officer and I were assigned temporary duty to the Admiral’s staff and as such we were two of four officers tasked with standing Flag watches in Enterprise CIC. The other two were members of the Flag staff.

The day after the rendezvous on Defender Station the task force was overflown by Soviet Tupolev Tu-16 Badger aircraft. I was in CIC at the time and I took charge and began directing the launch of F-4 fighter aircraft from the Ranger and F-8 aircraft from the Ticonderoga to intercept and escort the Badgers. Admiral Cagle was in CIC during the operation. When the soviet aircraft had departed the area I received a summons to report to Captain Kent Lee on the bridge. When I entered the bridge Captain Lee and Admiral Cagle were waiting there. Captain Lee looked at me and said, “John, the Admiral tells me that there was a lot of confusion in CIC during the intercepts of the Soviet aircraft.”

During the operation the Admiral had sent his aide to me to ask technical questions. I brushed him off because I was too busy monitoring the intercepts and particularly the fuel states of the interceptors. I look Captain Lee in the eye and replied, “If there was any confusion in CIC, Captain, it was on the part of the Admiral and not my crew.” Lee broke into a grin and said, “Thank you, John. You’re dismissed.” I left the bridge and never suffered any fallout from my shot at the Admiral Cagle.

As the junior man of the four officers standing six hour flag watches in CIC, I was tasked with the midnight to six a.m. Watch (balls to six in Navy lingo). About a week after the intial rendezvous I was standing watch in CIC. It was about 2:30 in the morning when a man monitoring the surrounding surface picture on a 50” raw radar scope called me over to observe a surface contact that was heading directly into the force at 31 knots.

We knew that the North Korean Navy had fast patrol boats mounted with deadly surface-to-surface missiles so this was a potential threat that I could not ignore. I picked up the telephone and called the flag war room. The staff intelligence officer answered. When I explained to him my assessment of the situation he said that he would inform the Admiral and get back to me. Minutes later my phone rang. It was Captain Kennedy, the Admiral’s Chief-of-Staff. “This is the Chief-of-Staff,” he said. “Launch the alert five.”

The alert five consisted of four heavily armed and manned A-6 attack aircraft on the flight deck capable of being launched within five minutes of the given order. I quickly passed the order to Cdr. Tom Cawley, the ship’s Air Operations Officer. In just minutes we could hear the A-6 engines starting directly above on the flight deck.

In those days communications between departments aboard aircraft carriers were through systems known as “squawk boxes.” MC – main communications – systems. Our MC box in CIC had a glitch which, for obvious reasons, we never reported to maintenance. We could overhear communications between the Admiral’s War Room and the Captain’s bridge. Before the alert 5 was launched Admiral Cagle called the bridge and said, “Kent, we are launching the alert 5.” Captain Kent Lee’s reply was, “Negative.” Just one word. After a long very pregnant pause the Admiral meekly said, “Well, alright Kent.”

I was not surprised by this exchange because I knew how much each of these men respected each other. What I didn’t know was that Captain Lee had been in the mini-CIC just off the bridged monitoring the situation on a Naval Tactical Data System (NTDS) console. The contact that our radarman in CIC had accurately tracked at 31 knots was displayed on the Captain’s console as moving at 24 knots. But Lee, the shrewd leader that he was, guessed the identity of the contact and as it turned out he was correct. It was a Russian Soviet destroyer that was returning to the area after going off over the horizon to refuel.

About 10 minutes after the cancellation of the alert 5 launch I was summoned to the Captain’s sea cabin. When I was seated across from Captain Lee, he looked at me and said, “John, do you realize that you may have started world war three?” I was shaken by this charge by a leader I so much admired but I knew that he would respect the truth and I laid it out for him. When I got to the part about the raw radar scope tracking was far more accurate than the computer tracking of surface targets by the NTDS system he stopped me. “That never occurred to me,” he admitted. The truth was that the staff almost started world war three by ordering the launch of armed aircraft to attack the unknown contact and it was the dedication (he was up at early hours monitoring the tactical situation) and the wisdom of Captain Kent Less that prevented that horrific possibility.

During the time that TF-71 was on station the force received a chilling order that involved a nuclear strike on North Korea. The CTF-71 Staff was alerted to be prepared to support a nuclear strike from an Air Force unit on alert in South Korea. According to a book authored by Anthony Summers and Robyn Power, Nixon was drunk when he gave the order. National Security Adviser Henry Kissinger called of the potential strike when Nixon awoke the next day.

The bottom line to the events I witnessed during that is that the Navy relies on great leaders to succeed. Captain Kent Lee was not sleeping in his sea cabin that night. He was sitting at an NTDS console just off the bridge when the Admiral’s staff and I were involved in making a decision that just might have started World War III – obliteration of a Soviet destroyer.

It was Captain Kent Lee’s extraordinary leadership and attention to tactical detail that prevented what might have been a world-changing disaster.