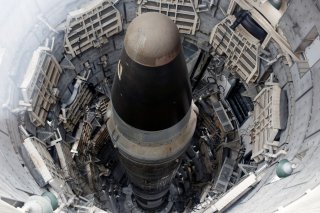 Would Russian president Vladimir Putin actually use intercontinental or tactical nuclear weapons in Ukraine? It is tough to imagine a threat more ominous, as it would likely spark World War III and place the entire world at risk of destruction.

For quite some time now, Putin and Foreign Minister Sergei Lavrov have deliberately warned of nuclear war in what appears to be an effort to scare NATO into inaction. But analysts are divided on just how realistic it is that Russia would go nuclear in Ukraine.

One thing is quite clear, however: the United States is not playing the Kremlin’s game. Instead, Washington continues to offer responsible, measured steps and has avoided making threats or resorting to escalatory language.

“[T]hat kind of rhetoric is very dangerous and unhelpful. Nobody wants to see a nuclear war happen. It’s a war that, you know, where all sides lose. … [D]angerous rhetoric is clearly unhelpful and something that we won’t engage in,” U.S. defense secretary Lloyd Austin said at a Ukraine-focused meeting in Germany with more than forty countries.

Recent Russian strikes on railway stations have led some to wonder if Russia is, in fact, deliberately targeting NATO supply lines into Ukraine, and Russian activity near Moldova is also raising suspicions of potential escalation. One thing seems clear, the Russian leadership appears to be repeatedly floating the possibility of nuclear attack as a “threat” or potential “deterrent” against NATO involvement. Clearly, this is something Austin and all of NATO take very seriously.

“[W]e certainly will do everything within our power … to make sure it doesn’t spin out of control. … any bluster about the possible use of nuclear weapons is very dangerous and unhelpful. Nobody wants to see a nuclear war. Nobody can win that. … There’s always a possibility that a number of things can happen. But, you know, again, I think it’s unhelpful and dangerous to … rattle sabers and speculate about the use of nuclear weapons,”  Austin said.

While most observers say that Putin remains a rational actor in many respects, others suggest that his behavior indicates a troubling shift in his strategies and approaches to warfare. The U.S. nuclear triad which maintains U.S. deterrence is extremely functional and quite capable of inflicting massive destruction upon Russia on short notice. The U.S. Navy’s nuclear-armed, ballistic missile submarines, for example, are quietly and secretly patrolling undersea hotspots around the world at any given time. This is intended by design to ensure that the United States can reliably deliver a catastrophic second strike upon any nation or actor who uses nuclear weapons.

Therefore, the United States’ nuclear deterrence posture essentially guarantees complete destruction for any nation launching a nuclear attack, something which Putin and the Russian leadership are certainly aware of. This raises the question of whether, if backed into a corner and facing defeat, Putin would launch nuclear attacks and essentially destroy his own country in the process. This remains a possible, though unlikely, outcome. However, regardless of speculative discussions of Putin’s possible temperament or sanity, it is clear that Putin and Lavrov are using the prospect of global nuclear war to prevent the United States and NATO from taking a more active role in Ukraine. Will cooler heads and deescalation prevail? Thus far, that is unclear, but the United States and its allies are continuing to arm Ukraine while seeking to manage what is becoming the most dangerous geopolitical confrontation in decades.