Worried About Disinformation? Let’s Get Strategic 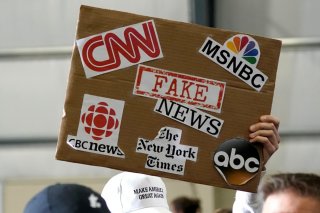 Conspiracies pushed by QAnon played a key role in the January attack on the U.S. Congress. Disinformation about coronavirus has fueled what some have called an infodemic. Both events are sensational to be sure. Yet to anyone who has studied strategy, neither the attack on Congress nor the infodemic in the wake of the pandemic should be surprising. Indeed, both events could be predicted, to a degree, had leaders and policymakers been approaching the integrity of the information environment systemically. Here strategic theory can provide a key—but not the American approach to it.

Much ink has been spilled discussing the American traditional reliance on advanced technology in strategic affairs. When they hit their fingers, Americans tend to improve the hammer, rather than alter the way they hold the nail. While this approach might have helped address strategic challenges in the past, any solution to problems within the information environment, like disinformation, should start with developing a new way of thinking, rather than inventing new digital hammers. And that is where the main American problem begins, as traditional overreliance on technology has freed Americans from the requirement to develop comprehensive, systemic, and holistic strategic thinking. As Colin Gray put it “excellence in strategy has not been an American strength.”

In comparing the cognitive differences between Asians and Westerners, psychologist Richard Nisbett argued that “the individualistic or independent nature of Western society seems consistent with the Western focus on particular objects in isolation from their context.” In other words, instead of focusing on the system as a holistic whole, American strategists tend to disaggregate issues into separate boxes/elements, “in a belief that once they develop a fundamental understanding of the system’s ‘building-blocks,’ they can then aggregate them and understand the system as a whole.” It is not surprising that the cornerstone of American strategic thinking is also the most disaggregated concept of strategy—the ends, means, and ways. While it might have worked well for more mechanical systems, like fighting physical wars against conventional opponents, a more organic system, as the information environment is, requires an entirely different way of holistic thinking, focusing less on the elements and more on the relations and interactions between them.

With its tendency to isolate component parts, one American strategic approach was to compartmentalize four distinctive instruments of power—or “DIME” (diplomatic, informational, military, and economic). When this disaggregation struggled to address the complexity of the twenty-first century, American strategists created “new acronyms such as MIDFIELD (military, informational, diplomatic, financial, intelligence, economic, law, and development), [which] convey a much broader array of options for the strategic and policymaker to use.” While creating new conceptual boxes can improve the process of strategy-making in more linear, cause-and-effect, mechanical systems such as a clash of wills in the battlespace; it is quite a futile practice for addressing holistic and complex systems such as the information environment.

Since antiquity, many brilliant minds have labored to decode the secrets of strategy. Countless books, articles, and treatises were written, offering every possible definition. Some focused on what strategy is, while others tried to explain what it does. Most, however, would agree that strategy is an art. Therefore, strategy, like any art, cannot be measured as an aggregation of elements. It can only be appreciated as a product of interaction between them. However, the American approach to strategy as an acronymic list of ingredients, strips strategy of the holistic harmony embedded in any piece of art. Following recipes can improve your cooking, but a true chef mixes flavors aiming to create something harmonious and delicious, which is not a simple sum of all ingredients, but a product of the blended interplay between all tastes.

It is not that the American strategists have failed to understand the deficiency of their approach. The contemporary lexicon is flooded with words intended to emphasize connectivity and interdependence, such as “joint,” “cross-domain,” “all-domain,” “integrated,” “synergy,” etc. However, following their traditional focus on the elements, rather than on the transactions between them, Americans still struggle to grasp the essence of strategy. By writing that “each instrument of national power comprises a set of broad capabilities available to the strategist” they simply create more idealized bins and pristine categorizations, missing the point that any attempt to comprehend an element without appreciating its contextual interactions with other elements will produce quite limited results. It might be enough for “cooking” simpler strategies of conventional warfighting, but strategies in the information environment require a skillful “chef,” who focuses on the interaction between ingredients, rather than on their individual characteristics.

The state of American strategic thinking about the information environment was summed up best by the Vice Chairman of the Joint Chiefs of Staff, General John Hyten, when he commented on the development of the Department of Defense’s new Joint Warfighting Concept in September 2020: “information advantage is going to be a critical piece... But as an activity right now, I’m not sure exactly how we’re going to document what information advantage really is.” It is not surprising that the complex, interconnected, defused information environment of the twenty-first century presents a difficult conceptual conundrum for American strategists. Its highly holistic and dynamic nature is at odds with how Americans understand strategy. Therefore, any attempt to improve the state of the American information environment and reduce the influence of malign actors (foreign and domestic) should start, first and foremost, with adjusting the strategic mindset to this environment.

Yet, most American approaches to understanding the information environment tend not to be systemic, as they focus on an array of specific actors and their tactics, and not on the interaction between all involved parts. Even when using the most holistic terms, such as “ecosystem,” the information environment is approached in the most atomistic way and is described by the means of “different pillars” that “play distinct roles.” But in a complex adaptive system, any given factor simply cannot exist in isolation from the wider network. Such a piecemeal approach puts policymakers on a back footing, given that strategy is inherently systemic and requires a whole picture perspective.

The first step in solving any problem is to acknowledge that there is a problem. American strategy is used to assembling powerful puzzles, built of predominantly technological capabilities and intended to produce effects as decisively and fast as possible. The information environment, however, requires a mindset of a patient chef, who knows that creating a meal is a process of blending and not just following procedure. A holistic worldview is built on an open-mindedness required to understand an actor’s behavior in the context, rather than attribute this behavior to the actor via oversimplified cause-and-effect analysis.

For example, the Russian interference in the American information space is interpreted in the United States as either a very specific attempt during election campaigns to tilt the balance against a certain candidate, or as a more general attempt “to provoke and amplify political and social discord in the United States.” However, these assessments, based on the American traditional focus on causes and effects, rather than on the system as a whole, offer only a partial view of the problem. It is not a secret that for the last decade, the Kremlin has been looking to restore the status of Russia as a great power in the eyes of the West. The strategic goal of what Moscow defines as “information war” against the West is “to convince the US, NATO and EU, as well as third actors that Russia is a great power”—interference in the elections, political subversion, and amplification of social divisions are only tactical steps towards this goal. Therefore, President Biden’s announcement during the election campaign that Russia is the biggest threat to the US is akin to patting President Vladimir Putin on the back for successfully accomplishing his mission.

The traditional American goal-oriented reasoning based on walking backwards along a chain of causality—“define the goal to be achieved and develop a model that will allow you to attain it”—is counterproductive for the understanding of how holistic systems work. Given the systemic nature of the information environment, any solution is likely to require the cooperation and coordination of a host of actors including across government departments, but also the tech sector, media, academia, and civil society. This means that whoever comes to “own” the problem of the information environment must be independent and as immune from politicization as possible. Only an impartial understanding of the interactive processes taking place in the information environment would allow policymakers to address the problem in a systemic way. Yet there is currently no way, at least in the Western canon, to look at the information environment in much the same way as a geographer maps a terrain to help inform a decision-maker about their choices. It’s about time American strategists break their mold of thinking.