Worrying about Being Drafted Doesn’t Make You a Disloyal American 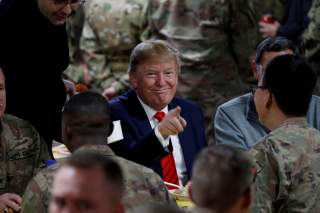 Fear of imminent war and a draft have escalated in the wake of U.S. forces killing Iranian general Qassem Soleimani in early January.

Some people even received fraudulent texts, supposedly from the Army Recruiting Command, telling them that they had been selected for the draft.

But there is no draft in the United States at the moment and there hasn’t been one since 1973, when the Vietnam War ended. A 1979 law renewed the requirement that men register with the Selective Service on their 18th birthdays, but the agency cannot conscript anyone without approval from both houses of Congress and the president.

Nevertheless, the fear felt by young men and those who love them was real, and it’s a fear with a history.

Draft avoidance is not new

American men have long looked for ways to avoid the draft. In the wake of Soleimani’s death, some young men took to Twitter, threatening to cancel their federal student loan applications because the law requires them to be registered with the Selective Service in order to qualify for financial aid. But this is only the latest iteration of attempted draft avoidance behavior.

Most people associate the 1960s, when the Vietnam War was raging, with draft resistance. Stories about how to beat the draft traveled widely then by word of mouth. By 1972, rumors about the lengths to which men would go to fail their pre-induction physicals had become common enough that scholars of folklore had noticed. Reports of men tattooing obscenities on their bodies, traveling to Tijuana for surgery to ruin rather than fix knees, or even hiding live animals in bodily cavities during their exams made the rounds.

But draft resistance has much earlier origins in the U.S. During the Civil War, poorer white men in the North and the South felt especially targeted by draft laws that offered wealthier white men legal means to avoid military service.

In the Confederacy, their discontent eventually forced a change to the law, limiting the ability of the wealthy to evade the draft. In the North, poor white men’s fear and resentment famously led to draft riots in New York City in 1863. Over the course of five days, mobs of disgruntled white workers and their families targeted government buildings and then African Americans and black-owned buildings and businesses. They blamed the government for the draft and African Americans for the war, especially in the wake of Abraham Lincoln’s signing of the Emancipation Proclamation earlier that year.

During World War I the Selective Service depended on massive public media campaigns in order to convince men that they should comply with the draft. While most ultimately acquiesced, local boards faced significant resistance.

But even during World War II, a moment of supposed unity and resolve to beat Nazi Germany and Imperial Japan, American men balked at the draft. While the lasting memory is of the “Greatest Generation” rushing to join up in the wake of the attack on Pearl Harbor, their willingness is more myth than reality.

It is true that almost 80% of American men born in the 1920s eventually served in the military during World War II and relatively few declared themselves as conscientious objectors or actively resisted the draft.

But millions of men searched for legal ways to avoid qualifying for the draft in the first place. It was only after the Selective Service tightened the regulations governing deferments that the federal government was able to pull so many men into uniform.

As my own research has shown, when Congress authorized what would become the World War II draft in 1940, 65% of the 17 million men who registered received dependency deferments. This meant that fathers and married men without children would not be drafted.

Many had rushed to the altar. Documents in the National Archives show that marriage rates for draft-aged young men jumped by 25% between 1940 and 1941. Birth rates similarly spiked. Congress eventually amended the law to allow only those dependents conceived or acquired by marriage or adoption before Pearl Harbor to guarantee a deferment.

This change led the Selective Service to develop detailed policies about how to measure the approximate date of a baby’s conception. A pregnancy started before Dec. 7, 1941, would gain the new father a deferment, but those started after that date would not guarantee similar privilege.

Efforts to avoid the draft during World War II extended to women, as well. In mid-1942, an estimated 500,000 wives quit their war jobs in order to strengthen their husbands’ claims to a dependency deferment.

Attempts to tighten dependency qualifications led to one of the uglier political battles of the war, with lawmakers and local draft board members vowing not to induct even one father. One senator warned that inducting fathers would lead to “wolf packs” of mischief-causing children roaming the nation.

The War Department, however, needed more men, and there simply weren’t enough who were not husbands or fathers to meet that need. When the manpower requirements of total war forced the issue, lawmakers finally relented and allowed the drafting of husbands and fathers. By mid-1945, only 0.5% of men still held their dependency deferments.

Similarly, men who managed to obtain deferments from the draft because their work in industry and agriculture supported the war effort held on to their jobs.

Men’s attitudes toward the draft are clear from a survey of California shipyard workers, who were exempt from the draft. Shipyard workers who were healthy enough to serve in the military rarely quit, while those whose health problems made them ineligible for service quit with impunity.

Across the country, young men, with help from their families, looked for ways to avoid sacrificing their time, money and bodies to the war. Kansas fathers bought land for their sons to farm. Mica miners in North Carolina, who provided an essential war material, went “digging for deferments.”

Military manpower officials have always had to grapple with men’s (and now women’s) fears and self-interests, regardless of the degree and nature of foreign threat.

When the draft has been active, policymakers had to deploy the threat of jail time along with the promise of benefits, like low-interest home loans and college tuition, to entice men to comply with the draft. In our current era, when the military is staffed solely by volunteers, they have had to increase exponentially the availability of those benefits in order to appeal to individuals’ self-interests.

The Department of Defense has made health care, education, housing and more available not only to soldiers, sailors, airmen and Marines but also to servicemembers’ families in order to keep the military fully staffed. Recruitment materials, studies have shown, work best when they focus on individual attainment rather than ideals of honor or patriotism, as ideology is rarely strong enough to overcome citizens’ aversion to self-sacrifice.

Most young people have come to expect the military to operate without them, and those who choose to enlist do so voluntarily.

But worries of a new war in the Middle East coupled with the ensuing social media storm upset the delicate balance the All-Volunteer Force has reached with the American populace. Americans’ fear of and reluctance to participate in the draft came roaring back to the surface.

That fear appeared in a new form – social media – but the fear itself is an old one.