Would Iraq Really Purchase the S-400 from Russia? 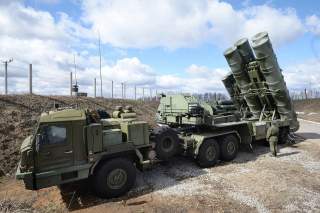 Is Russia really trying to sell their flagship S-400 missile defense system to Iraq? Not so fast.

A string of reports alleged earlier this week that Russia is seeking to export the S-400 to Iraq. To be sure, it’s a timely and compelling narrative. The Trump administration’s decision to order a lethal airstrike against top Iranian general Qasem Soleimani has cast doubt over the future of continued U.S. military presence in the Middle East, culminating in the recent Iraqi parliament vote for the expulsion of U.S. troops from Iraqi soil.

It’s not unreasonable to assume that Washington’s peer competitors would try to fill the potential military vacuum left by a US withdrawal from Iraq, and a prospective decision by Baghdad to import the S-400 would send a clear message about Iraq’s geopolitical reorientation in the post-Soleimani world.

There is only one problem: to date, no evidence exists to support the notion that the Russian government is taking concrete steps to sign an S-400 export contract with Iraq. All of the speculation on this subject is premised on one statement given by a prominent Russian defense commentator, Igor Korotchenko, to Russian state news outlet RIA: "Iraq is a partner of Russia in the field of military-technical cooperation, and the Russian Federation can supply the necessary funds to ensure the sovereignty of the country and reliable protection of airspace, including the supply of S-400 missiles and other components of the air defence system...”

Like many of his colleagues in the Russian defense commentary sphere, Korotchenko sees the global proliferation of the S-400 system as a positive good; a supposed guarantee of “national sovereignty” against US/NATO dependence. This very same line of thinking has led Korotchenko to suggest the S-400 to Azerbaijan and Saudi Arabia, two states that have expressed little to no interest in purchasing the Russian defense system. Korotchenko has likewise been an outspoken advocate of offering S-400 to Iran, a prospect that Moscow has continually rejected out of concern for a military escalation spiral in the Middle East.

In other words, Korotchenko’s belief that Iraq would be better off with the S-400 should not be conflated with concrete plans on the part of the Kremlin or Rosoboronexport--Russia’s state arms export agency-- to offer the S-400 to Iraq. Iraq has been known to purchase high-end Russian military hardware-- most notably, the T-90S main battle tank-- in the past, but Baghdad understands that the S-400 is a strategic weapon that portends serious geopolitical implications for its neighbors. The same RIA article that cited Korotchenko went on to quote Haidar Hadi, the Iraqi ambassador to Russia until late 2019, who unequivocally stated that “there is not even a hint” of S-400 contract negotiations between Moscow and Iraq.

None of this is to say that an Iraqi S-400 import contract is impossible over the long-term, pending the fate of the U.S. military presence in that country. What is clear, however, is that concerns over an imminent Russian campaign to give Iraq the S-400 are greatly exaggerated.