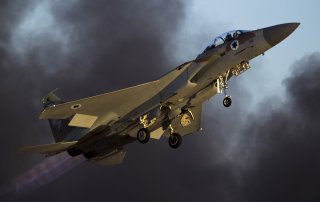 Israel recently completed yet another election and is in the midst of the post-election election jockeying that’s become a regular feature of political life there. Meanwhile, the U.S. has begun talks to re-enter the Iranian nuclear agreement, after the Trump administration pulled the United States out of that agreement. Iran, for its part, will also be voting in a new presidential election this June.

Yet, there’s once again talk that Israel might make a move to attack Iran’s nuclear capabilities.

According to an op-ed written by Jay Mens, the executive director of the Middle East and North Africa Forum, the timing may be right for Israel to attack Iran, in a way similar to Israel’s successful attack on Iraq’s Osirak nuclear reactor in 1981.

Mens lays out the scenario as a parallel to the situation with Saddam Hussein’s Iraq forty years ago. Israel had already attempted numerous unconventional methods for stopping Iraq’s nuclear ambitions. Other parallels include, in the author’s eyes, not enough support from the international community in curtailing those nuclear ambitions.

There has been frequent speculation over the last two decades that Israel could launch such an attack on Iran, but while Israel is believing to undergone various efforts to sabotage Iran’s nuclear capability, they have not launched a full-on strike.

There is one thing different today from in 1981—Israel recently reached peace deals with multiple Arab countries, including Bahrain, and there are indications that Saudi Arabia could be next. Those countries are generally opposed to Iran.

How would it work?

“Their alleged plan is similar to a scenario the Brookings Institution imagined ten years ago: Israeli fighter jets would use Saudi airspace and refuel on Saudi soil before striking Iran, thus mitigating the key logistical difficulties of an attack on Iran’s nuclear facilities and raising the likelihood that a preemptive strike would be successful. As far as we know, the plan is mere speculation. Yet theoretical feasibility of it shows how much the region has changed, and the growing number of local variables with which American strategy in the Middle East has to contend.”

Mens notes that it would make sense for Israel to strike Iran “sooner rather than later.” The question is how Iran would respond to such a strike. Would it order Hezbollah and other proxies to attack Israel? Attack Israel with ballistic missiles? Launch a full-on war in response?

Whatever happens, Mens speculates that a strike on Iran would complicate the Biden administration’s plans to renegotiate the Iran nuclear deal.

“Ballistic strikes on Israel would make it politically unfeasible for the Biden administration to resurrect the nuclear deal or withdraw the Trump administration’s sanctions from Iran. Those would continue to hinder Iran’s rebuilding of its nuclear program and its economic recovery, thus withholding more funding for Iran’s regional proxy network,” Mens writes.