The Wrong Response to Gun Violence: Are Lockdown Drills a Bad Idea? 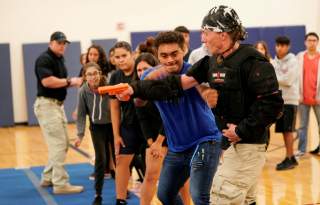 School lockdown drills and exercises are controversial today, due in large part to some troubling examples making headlines.

Teachers in Monticello, Indiana, for example, were hurt when they got shot in the back with plastic pellets.

Students in Franklin, Ohio, were exposed to sounds of simulated gunfire.

Sometimes, role-playing kids and teens, covered in fake blood, are scattered throughout their schools – screaming.

Parents who fear that these experiences could be traumatizing their children are objecting and calling for schools to stop holding them. Rather than reduce the harm caused during mass shootings, they say, dramatic approaches cause harm by amplifying students’ fears about the danger of being shot at school.

This raises a good question I seek to answer through my research: Is it possible to be prepared without being scared?

Today, more than 95% of public schools conduct lockdown drills. They became considerably more commonplace and focused on active attacker situations after the 1999 shooting at Columbine High School, in which 12 students and a teacher were murdered.

But U.S. schools have held emergency preparedness drills for decades.

In the 1950s, they practiced duck-and-cover drills in preparedness for the atomic attacks Americans feared would occur during the Cold War.

Fire drills became commonplace in schools after 1958. A student in a Chicago parochial school in that year started a fire in the building’s boiler room, killing 93 students and two teachers.

Across the nation, students, faculty and staff participate in drills to prepare for earthquakes and tornadoes without hesitation or second thoughts. They have become routine.

So why is resistance to lockdown drills apparently on the rise?

There are two key reasons why there is such an aversion to lockdown drills. The first comes from a muddling of two things that are related but not the same: exercises and drills.

Exercises incorporate realistic sights and sounds, such as the simulated screaming and bleeding that might occur during a mass shooting.

Drills, on the other hand, only require practice, such as evacuating a building or locking doors and getting as many people as possible out of sight.

During fire drills, for example, nobody sets schools on fire to make them seem more realistic. Instead, everyone practices how to respond so that it’s easier to do the right thing in a frightening situation.

Exercises and drills are often talked about as if they are the same. But they are different, a point that often is lost in the call to end the practices associated with both of them that are often perceived as traumatic.

A second reason that lockdown drills are misunderstood is the lack of available research.

Anecdotes about the impact of lockdown drills are everywhere. Evidence, however, is scarce. In fact, to date, just one study published in an academic journal has examined the effects of a lockdown drill on students.

In 2007, psychologists Elizabeth Zhe and Amanda Nickerson found that when conducted in accordance with best practices, drills can increase awareness of how to respond to a situation without increasing anxiety or making people feel less safe.

These best practices for lockdown drills, according to the National Association of School Psychologists and others, do not include simulation exercises that involve fake blood and screams.

Participants should know that they’re experiencing a drill, rather than a real situation, to minimize the possibility of trauma. Mental health professionals should be involved in the planning and carrying out of drills. And these exercises should be appropriate both for the ages involved and for special needs such as prior traumatic experiences.

Also, teachers and staff should always talk with students afterward to answer any questions they may have.

Lockdown exercises have become more elaborate since the 2007 study was conducted. Drills have remained largely the same.

Lockdown drills, like fire drills, are intended to help people respond correctly in emergency situations by making them practice.

The team I head has found that training helps make everyone feel better prepared. Building confidence enhances the ability to do what’s needed during an emergency, our research indicates.

Schools typically have three clearly defined goals during lockdown drills: lock the doors, turn off the lights and remain silent and out of view of anyone in the hallway.

In real life, situations that would result in a lockdown being called — such as an armed attacker on school grounds — usually end within minutes. Locking doors slows down assailants, giving first responders more time to stop them.

Turning lights off makes it harder for an attacker to find their targets, as does remaining out of sight and staying quiet.

Another commonly taught strategy is “Run, Hide, Fight,” introduced as a collaboration between the Houston Police Department and the Department of Homeland Security several years after the Columbine shooting. That plan instructs kids to run and escape the building, hide if that is not an option, and fight back as a last resort.

But critics argue that Run, Hide, Fight is not necessarily the best practice for schools. They say that running makes sense only when locking down isn’t an option, such as when someone gets stranded in a common area or hallway. And most school security experts discourage fighting attackers, as most people aren’t trained in self-defense, especially against armed assailants.

Each emergency situation is different. Each has unique circumstances that dictate the right response. This is why training is so important: It empowers students, teachers and others to make critical decisions in a crisis.

I can speak about this issue not just from my professional observations but based on my own perspective. I grew up in the Parkland, Florida, area where an armed former student entered Marjory Stoneman Douglas High School on Valentine’s Day in 2018, killing 17 people and wounding 17 others.

The lack of training for how to respond during active-shooter situations left everyone in the building vulnerable, according to an official investigation.

Despite the fact that school shootings have become a matter of grave public concern over the past two decades, public schools remain among the safest places for children to be and mass shootings at schools are rare. Yet they do occur.

I believe that kids should be prepared, but also that drills do not have to be scary to be effective. Schools can take steps to minimize the anxiety and trauma surrounding lockdown drills.

While I don’t recommend exercises featuring plastic pellets and fake blood, the evidence available indicates that practicing what to do when an emergency arises is worthwhile.