The 'Yang Gang' Has Disbanded (For Now): Have We Really Seen the Last of Andrew Yang? 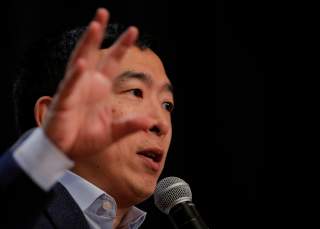 The first slate of post-primary candidates have departed the 2020 campaign, including Michael Bennet and Deval Patrick, neither of whom ever gained notoriety. The bigger loss was the departure of Andrew Yang, the tech entrepreneur who ran a mid-size campaign based on grassroots fundraising, promises to put “Humanity First,” and internet memes.

Yang, the son of Taiwanese immigrants, announced his campaign in November 2017, with a focus on solving the economic anxiety brought about by what he calls the “fourth industrial revolution.” Automation was going to wipe away millions of jobs in the near future, Yang said, and the country needed to prepare to meet the challenge of a twenty-first-century economy.

The solution that defined Yang’s campaign would be a universal basic income (UBI), which he termed the “freedom dividend.” Under Yang’s plan, every American over the age of 18 would receive $1,000 from the government, no strings attached. In his is conception, every American was entitled to a share of the wealth created by the technological economy. While the UBI formed the keystone to his campaign pitch, Yang’s website contained over a hundred different policy positions.

Despite starting with no name recognition, over the course of two years, Andrew Yang built an enthusiastic base of online supporters, affectionately nicknamed the “Yang Gang.” His fundraising numbers were competitive, and he withdraws after having raised almost $32 million.

Having no previous political experience, Yang was treated as a curiosity by the mainstream media, who he accused of being biased against him. Examples include referring to him as “John Yang,” replacing his photograph with that of a random Asian man or ignoring him in favor of candidates with lower polls and fundraising. Andrew Yang consistently was given the least amount of speaking time at the Democratic debates. The internet-savvy candidate was still able to rack up a number of celebrity endorsements, including eccentric Tesla CEO Elon Musk, Asian-American actor Ken Jeong, and world-famous comedian Dave Chappelle.

Despite the fundraising numbers and the attention, Yang’s support never translated into real votes. In the Iowa caucus he came in sixth place (1% of the vote), and eight in New Hampshire (2.8% of the vote). “While there is great work left to be done, you know I’m the math guy. And it is clear tonight from the numbers that we are not going to win this race,” Yang told a crowd of supporters last night. During presidential debates the candidate was known to wear a MATH pin, an acronym for “Make America Think Harder.”

“This movement has outlasted over a dozen senators, governors, and members of congress to become the most exciting force in this entire race. The Yang Gang has fundamentally shifted the direction of this country and transformed our politics, and we are only continuing to grow,” he continued.

Last week, in Iowa, Yang did not rule out the possibility of another presidential campaign in the future. “We’ve got a list of millions of people. We’ve got hundreds of thousands of donors. Plus, the national press would have to have us seriously next time,” he told Politico’s Tim Alberta. “I’m only 45, you know.”