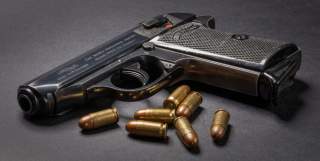 2019 saw the release of many new innovative guns as well as re-releases of old classics that hadn’t been made for years. Let’s take a look, shall we?

Here are the top guns that were released in 2019:

Perhaps the most exciting new hunting rifle to have been released in 2019 was the Browning X-Bolt Hunter. The X-Bolt Hunter was designed for maximum accuracy at long ranges, while also being incredibly lightweight.

Indeed, the resulting rifle weighs just eight pounds and yet has a twenty six inch stainless steel heavy fluted shorter barrel to deliver maximum accuracy. As with other X-Bolt rifles, it also features an excellent trigger with an ambidextrous tang mounted safety.

Colt began re-releasing their snake revolvers in 2017 with the Colt Cobra. In 2019, they released the King Cobra, a .357 Magnum version of the Cobra available in a two inch, three inch, or four inch barrel.

The King Cobra also has a stainless steel finish and with your choice of wood or Hogue polymer grips. It also features a bass bead front sight and a more modernized look than the original King Cobra that was released in 1986.

The Kel-Tec CP33 was easily the most exciting .22 LR pistol to be released in a long time. Not only does it look cool, it’s also a dream to shoot. With virtually no recoil thanks to the weight and the .22 LR ammunition, it’s also made easy to attach a suppressor. The reciprocating slide design of the weapon is also very similar to the AR-15, while the long rail on the top and the M-LOK slots make it easy to attach accessories and optics.

But the real standout of the gun is its capacity: 33 rounds of ammunition in the magazine plus one more in the chamber. There just aren’t any other .22 pistols on the market that offer you that kind of firepower.

The SIG Sauer MPX line of rifles is virtually the same thing as the AR-15 platform, but with one major difference: the MPX uses a gas piston operating system, so there’s no need for a buffer tube assembly. The result is a rifle that can fold down the shoulder stock further than the AR-15, making for a more compact weapon.

The SIG Sauer Copperhead in particular, released in 2019, has just a 3.5 inch barrel and is only 14.5 inches when extended, making it one of the most compact AR-type weapons on the market. Its also fully ambidextrous and comes with a twenty round 9mm magazine, with a weight of under four pounds.

2019 was the year the Walther PPK and PPK/S were re-released for the American market. This is also the first time that these guns are actually being made by Walther at the Walther factory since the 1940s. Following World War II up until 2015, Walther had always outsourced the manufacture of the PPK and PPK/S to other companies such as Manurhin, Interarms, and Smith & Wesson.

The new PPK and PPK/S, however, are actually built at the Walther factories in Ulm, Germany and Fort Smith, Arkansas, so you’re actually getting a legitimate Walther-made PPK pistol. The new guns have an extended beavertail to prevent slide bite, and a one piece feed ramp to allow feeding of hollow point ammunition.

Another exciting gun released by Walther for 2019 was the Walther Q5 Match Steel Frame. The use of steel rather than polymer makes the gun heavier, but it also greatly reduces recoil to make the gun easier to shoot. This pistol is designed primarily for competition use, so the reduced recoil is definitely a good thing.

On top of that, the Q5 Steel Frame also has a very smooth operation with an outstanding ergonomic grip that Walther has been known for. Standard magazine capacity is 17 rounds, and the gun also has a Picatinny rail to add lights or lasers if you so desire.

2019 brought a myriad of high performing firearms to improve any collection. We expect 2020 to be just as exciting when it come to top guns to be released.

This article by Alex Joseph first appeared at Gun News Daily on January 13, 2020.