Yes, American and Soviet Jet Fighters Dueled Each Other During the Korean War 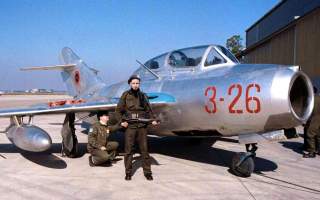 Key Point: Moscow lent secret air support to North Korea during the war and Washington secretly fought them in the air. These clashes are just one more example of how the Cold War could have gone completely hot.

In the afternoon of November 18, 1952 four sleek jets painted an inky navy blue soared off the deck of the carrier USS Oriskany into a swirling Siberian snow storm gusting over the Sea of Japan. The carrier was part of Task Force 77, a fleet of twenty-five ships which included three carriers used to launch daily airstrikes on North Korean bridges and logistics during the Korean War. Earlier that day, its warplanes had struck the logistical base at Hoeryong, used as a gathering point for supplies received from China and the Soviet Union a short distance across the border.