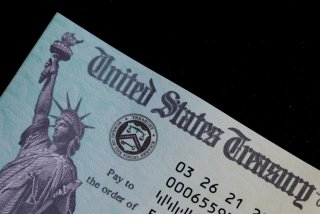 It appears that the Internal Revenue Service (IRS) did not differentiate between ordinary law-abiding citizens and those incarcerated for violent crimes when disbursing $1,400 stimulus checks approved via President Joe Biden’s American Rescue Plan last spring.

According to Fox News, “The federal government is suing convicted murderers and sex traffickers who received Covid-19 stimulus checks, ordering them to use the funds to pay restitution to their victims’ families.”

Massachusetts federal officials filed a motion urging the court to order Tsarnaev to relinquish the check and any other funds in his inmate trust account to be put toward the more than $100 million he still owes his victims.

The Federal Bureau of Prisons cited information on the tax agency’s website, which states “that the IRS cannot deny a payment to someone who is incarcerated if they are a U.S. citizen or U.S. resident alien, if they are not claimed as a dependent of another taxpayer, and if they also have a Social Security number valid for employment.”

According to Biden’s stimulus legislation, those who earned as much as $75,000 in adjusted gross income (AGI), or couples earning $150,000—in addition to their children or adult dependents—qualified for the full $1,400 per individual. Moreover, single parents with at least one dependent who earned $112,500 or less also qualified for the full amount. But those with an income of $80,000, or a couple $160,000, were not owed any payment for this round.

Ordinary citizens who received their stimulus checks can expect to receive an IRS notice known as Letter 6475, which can be used to assist with the calculation on their federal tax returns.

The IRS has also stated that individuals who received the direct payments won’t be on the hook for any taxes. “No, the payment is not income and taxpayers will not owe tax on it,” the IRS writes on its website. “The payment will not reduce a taxpayer’s refund or increase the amount they owe when they file their 2020 or 2021 tax return next year.”

For those who have yet to receive their stimulus funds, they should make sure to utilize the Recovery Rebate Credit on their tax returns.

“If you didn’t qualify for a third Economic Impact Payment or got less than the full amount, you may be eligible to claim the 2021 Recovery Rebate Credit based on your 2021 tax year information,” the IRS says.

“If you’re eligible, you’ll need to file a 2021 tax return even if you don’t usually file a tax return. Your 2021 Recovery Rebate Credit will reduce any tax you owe for 2021 or be included in your tax refund,” it concludes.