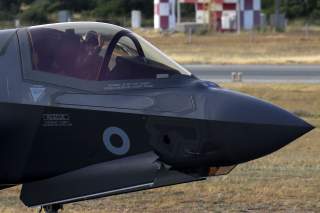 Key point: London finally got a chance to try out its new F-35Bs during the summer of 2019. The Royal Air Force sent its stealth fighters to see action and was not disappointed.

The F-35s did not drop bombs or fire missiles or guns during their combat patrol. Still, the mission made the United Kingdom the third country after Israel and the United States to deploy F-35s in wartime.

Just because the F-35s didn’t employ weapons doesn’t mean they can’t do so. "We haven't dropped any weapons from Typhoon in that period, either," Group Captain Jonny Moreton, the commanding officer of 903 Expeditionary Air Wing based at Akrotiri, told Evening Standard. "It is not a very kinetic phase of the operation at the moment."

The RAF in April deployed six of its 17 F-35Bs to Akrotiri for exercises and combat missions over Iraq and Syria. Between June 16 and June 25, 2019, the six stealth fighters combined flew 13 combat missions. Each mission involved a pair of F-35s and, presumably, a pair of Typhoons.

“The F-35s are the most advanced jets our country has ever possessed and will form the backbone of British air defense for decades to come,” Defense Secretary Penny Mordaunt stated. “They have passed every test their training has thrown at them with flying colors and their first real operational mission is a significant step into the future for the U.K.”

The RAF slowly is acquiring a fleet of as many as 138 F-35s at a cost of around $100 million per plane as replacements for warplanes it already has retired, including Harrier jump jets and swing-wing Tornado fighter-bombers.

The Tornadoes operated from Akrotiri for missions over Iraq and Syria until February 2019. The RAF shortly thereafter retired the type.

Despite an increasing pace of deployments for the F-35, the multi-national program that develops and builds the type continues to struggle. Trade publication Defense News in early June 2019 revealed lingering flaws in the F-35’s design.

So far, the F-35B’s sortie rate in wartime conditions is no better than the sortie rate the remnant fleet of 1980s-vintage Tornadoes achieved in the years preceding their retirement. The eight Tornadoes at Akrotiri as recently as 2015 managed two, two-ship sorties a day, each lasting six to eight hours, according to Financial Times.

The six F-35s at Akrotiri for their part flew 95 sorties in the four weeks preceding their first combat mission. That works out to roughly one sortie every two days per plane, a pace of flying similar to what the Tornadoes maintained.

Besides flying from land bases, RAF F-35Bs starting in late 2019 also will operate from the Royal Navy's two Queen Elizabeth-class aircraft carriers. While the RAF owns the F-35s, air force and navy crews together fly the planes as part of the U.K. Lightning Force.