Yes, an F-22 Raptor Can Lose Its Stealth 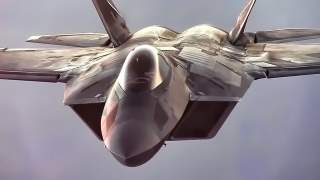 Furthermore, taking a closer look at the plane, users took note of what appears to be the “eroded” stealth coating on the F-22’s nose.

Several eagle-eyed Twitter users have spotted what they believed was severely eroded Radar-Absorbing Coating in front of the canopy of a U.S. Air Force (USAF) F-22 seen refueling over an “undisclosed location.”

As reported by Sputnik News, the U.S. Transportation Command (USTRANSCOM) published a video showing one of the 12 F-22s recently deployed to an airbase in Qatar being refuelled by a KC-135 Stratotanker, with no details made available about their position.

However, social media users quickly compared the terrain below the fighter in the photo to satellite images of an area of northwest Syria, seemingly indicating that the planes were flying northeast of Raqqa, a Syrian city controlled by the US’s Kurdish allies.

Furthermore, taking a closer look at the plane, users took note of what appears to be the “eroded” stealth coating on the F-22’s nose. “Yikes.” one user quipped. “Wtf,” another wrote, posting a detailed picture of the seemingly damaged area.

As we have previously reported the F-22 Raptor stealth fighters started to lose their radar-absorbing coating in 2016 while they are taking part in military operation in Syria.

The radar-absorbing coating, that hides the Raptor from radars in fact, warped and started to peel off. At the time the USAF said that one of the reasons of this problem were climatic conditions affecting the area of operations.

The claim was confirmed by John Cottam, Lockheed-Martin F-22 Program Manager, who noted that external factors, such as rain and sand dust, not only wrinkle and peel off the coating but also turn it into its original liquid state.

Indeed the F-22’s radar-absorbing coating experienced the first problems in 2009, when Raptor pilots complained that the coating easily erased from F-22’s body during contact with fuel and lubricating oil.

However, Lockheed Martin said that has developed a new, more resistant coating which will be applied to all F-22s during maintenance operations. The process should start this year.

Nevertheless cracked coating should not compromise the plane’s stealth capabilities as a source close to the F-22 Raptor program, who wishes to remain anonymous, said to The Aviation Geek Club. “Coating performance before, during and after the deployment have remained the same. As valued of an asset as the Raptor is we would have had to pause Raptor operations if an issue would cause a compromise to its capabilities. It would have been a very big deal if that was the case considering how often we are requested by not only U.S. but partners nations also.”

Noteworthy the F-22s played “an integral role” in the Apr. 14, 2018 airstrikes against Syria, in which the US, the UK and France fired over 100 sea and air-launched cruise missiles at the country.