Yes, the Global Economy Will Slow Down in 2020 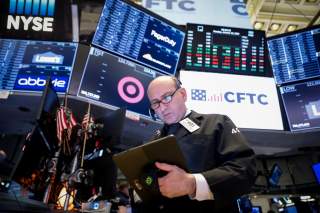 For the global economy in the year ahead, challenges won’t be far away, with uncertainty from unpredictable policymaking on trade and investment, coupled with potential geopolitical disruptions and financial vulnerabilities, leading the way. And that's not all, for there are a variety of other factors that portend a sustained period of sluggish growth, including:

Geopolitical tensions such as the recent standoff between the United States and Iran, a potential technological divergence between Washington and Beijing, and the possibility of a U.S.-EU trade war.

Financial fragility related to years of accommodative monetary policy and the massive accumulation of public and corporate debt everywhere.

Country-specific issues that could affect major economies, including the anticipated slowdown in China's growth.

Possible severe weather events or public health emergencies, such as the coronavirus outbreak in China.

If these risks come to pass, the world's leading economies will be hard-pressed to respond in a coordinated, effective manner. Already, international cooperation is frayed as countries look increasingly inward, while slower growth with stagnant incomes could encourage even more economic nationalism than exists at present. Ultimately, the host of threats presents the world's policymakers with a tricky path toward safeguarding growth in the global economy.

In Search of Goldilocks

Global growth is neither too hot (inflation) nor too cold (deflation), but neither is it what anyone would consider "just right." The International Monetary Fund recently downgraded its global forecast for 2020 from 3.4 percent to 3.3 percent after last year's estimated growth only totaled 2.9 percent — a figure that itself was downgraded six times. The IMF cited signs of the possible bottoming out of the worldwide economic downturn, but it is one of the more positive prognosticators. In contrast, the World Bank projects global growth in 2020 to be a quarter less than the IMF at 2.5 percent, which is also more in line with others' forecasts. Whatever the case, the global economy is sluggish at best, especially when considering that average annual growth has been 3.5 percent since 1980 and downside risks dominate probabilities for improvement.

Significantly, global trade is no longer a strong driver of economic growth. The final data for 2019 is not available, but preliminary WTO numbers suggest a maximum increase in global trade volume of between 1 and 1.4 percent in 2019. That's down from 4 percent in 2018, making it the weakest since the global financial crisis. Moreover, the ratio of global trade growth to GDP growth was less than one to one, compared to the roughly equal rates since 2009 and the higher proportions that characterized much of the post-World War II period. Also, foreign direct investment fell by 1 percent in 2019 — the third decline in a row — according to the U.N. Conference on Trade and Development (UNCTAD). Economists are uncertain as to why this is changing, but links between trade and investment do function as an engine for enhanced productivity and growth.

'Animal Spirits' are Alive and Well

Those numbers suggest a lack of business and investor confidence accounted for much of the slow growth in 2019, as 90 percent of advanced economies and 60 percent of emerging market and developing economies decelerated. For 2020, the hopes for improvement are based on possible waning trade tensions, particularly amid the U.S. and China's phase-one trade agreement, the certainty of Brexit after last month's British elections, and suggestions that some larger emerging market economies are registering higher growth.

The phase-one deal trade deal, however, not only failed to address basic issues but also retained existing tariffs, albeit at a lower level for some. Moreover, a comprehensive deal is unlikely, especially if the United States fulfills its threats to enforce the terms of the phase-one deal aggressively. In the end, the IMF estimates that the cumulative effect of U.S.-China trade tensions will reduce global gross domestic product by 0.5-0.8 percent by year's end.

Other challenges in the U.S.-China relationship could include further efforts at financial and technological decoupling. Together, the two countries account for 40 percent of the global economy, but each is moving to restrict technology from the other and engineer its own technology standards, including those for 5G networks. The inefficiencies in competing standards will hinder productive investments, as companies worldwide will have to follow bifurcated rules and regulations, all while preparing for an even deeper divergence in the market's leaders.

What's more, the prospects for a de-escalation in trade tensions elsewhere are not encouraging. Despite a cease-fire with France over digital taxation, U.S. President Donald Trump used an appearance at Davos to reiterate his threat to place tariffs on EU automobile exports and, potentially, start a new trade war. And while Brexit will proceed on Jan. 31, the European Union and the United Kingdom have yet to work out the nature of their future relationship. Protectionism among G-20 countries has already affected $1 trillion worth of trade flows — or around 7 percent of the global goods trade — since 2018. In addition, regulatory restrictions affecting foreign direct investment increased by more than a third over the same period, according to UNCTAD. Progress on other trade agreements, such as between the European Union and the Common Market of the South (Mercosur), has stalled, while the WTO dispute mechanism is in disarray.

Partly as a result, the OECD business confidence index has recorded more than a year of declines to fall to its lowest level since 2009; similarly, most other global business sentiment indicators are barely above recession levels. The resulting lower investment spending, together with slack productivity, holds back potential economic output. Apart from fundamentals, investment depends in part on what economist John Maynard Keynes called "animal spirits" — his term for business confidence as an unknown or unmeasurable factor. Because of flagging investment, consumption in the United States and Europe is the last main pillar supporting growth in advanced economies. That, however, could also fall by the wayside if declining business confidence slows hiring or wage growth, eroding the "favorable dynamics between still-resilient consumer spending and improved business spending" on which the IMF pins much of its optimism.

As much as two-thirds of the IMF's projected increased growth depends on an uptick in a small number of large emerging markets, including Argentina, Brazil, India, Mexico, Russia, Saudi Arabia and Turkey. Growth figures, however, remain subpar in all, with the IMF now admitting that a slowdown in India is a major drag on emerging markets. Moreover, growth in those countries is mostly noncorrelated, so it is not certain that a pickup in one will affect others. In addition, the number of policy options they have to respond to downturns could diminish under market pressure or financial stress. Growth remains robust in plenty of small countries (mostly in Africa), but none are large enough to make an impact on the global growth rate.

As for China, its growth is the slowest in three decades; that, unsurprisingly, is dragging down the world economy overall and hurting commodity-exporting countries that profited from the East Asian giant's economic boom. While commentators can argue over differences of one or two percentage points in China's growth, such exercises are pointless, especially given how opaque Beijing's data is. What's clear is the country is rebalancing rapid growth away from its export-driven model even as it copes with increased domestic vulnerabilities. Among other issues, a debt-to-GDP ratio of roughly 300 percent for public, household and corporate borrowing threatens China's financial system while creating unsustainable real estate and other asset bubbles. Those, in turn, drive a need for deleveraging that will limit Beijing's ability to increase domestic liquidity or fiscal spending to stimulate growth.

After nearly 10 years of accommodative monetary policies with low or nonexistent interest rates and large-scale central bank asset purchases, one legacy of the 2008-9 financial crisis is rising macroeconomic imbalances. Monetary policy is the major countercyclical factor underpinning growth; in fact, the IMF has attributed half a percentage point of global GDP growth to monetary stimulus in 2019 and 2020. That has driven up prices in global equity and fixed income markets to levels that the underlying fundamentals probably cannot support — entailing, in effect, a bubble. Despite an estimated $5 trillion decline since September 2019, about one-fourth of corporate and sovereign bonds still trade with negative yields, which distort financial return calculations and undermine bank profits. Monetary stimulus may have reached its limits, however, and is increasingly ineffective in raising inflation rates to desired levels, forcing major economies to look for other ways to restore growth that do not undermine public debt sustainability.

The World Bank recently reported historic highs of nonfinancial debt at 230 percent of global GDP. And if one adds interbank lending to the picture, global debt levels could rise to more than 300 percent of GDP, which is significant given that a freeze in the interbank market in 2008 dried up global liquidity, triggering the financial crisis. In addition to negative interest rates sapping the effectiveness of monetary policy, rating agencies could downgrade a large volume of investment-grade debt to junk status in any economic downturn, as overleveraged sovereigns or companies would be unable to repay debt. That, of course, would trigger a renewed financial crisis. Corporate defaults would have immediate negative effects on stock markets, which could subsequently affect consumer sentiment and spending. As for sovereign debt and balance of payments financing, the fall in FDI is slowing efforts to rebalance the external financing of imports and current account deficits away from debt-creating flows, adding to longer-term sustainability concerns.

Random, low-probability events with high impact — known as "black swans" — are impossible to predict, but the appearance of birds of a different hue is likely. Financial markets seem to have shrugged off the short U.S.-Iran confrontation, but the continued prospect of other geopolitical problems creates additional uncertainty, especially in commodity markets that many emerging market and developing countries depend on for revenue. In addition, adverse weather events — or what the Bank for International Settlements now calls "green swans" — are increasingly likely, as are public health emergencies such as the coronavirus outbreak in China.

Ultimately, the global economy may be in a long-term slowdown. More worryingly, major central banks are running out of tools to address the problem. Additionally, the prospects for fiscal stimulus are poor, due to political issues in places like Germany with low public debt and higher levels of debt in other countries. Adept policymaking and coordinated responses could manage — or even forestall — many of the risks to the global economy, but a large number of individual threats leaves little room for error among policymakers to chart the best path forward.