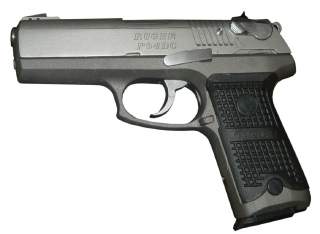 The use of the wider .40 S&W however reduced magazine capacity significantly, from the fifteen rounds of the nine millimeter P85 to just ten rounds in the P94. The .40 S&W round was seen as a middle ground between what many considered an anemic nine millimeter round and heavier .357 Magnum and .45 ACP pistols and revolvers.

In 1994, Ruger came out with the P94 handgun. The P94 represented a maturation of the P-series design that benefited from seven years of being on the market. The gun’s blocky features were trimmed back quite a bit, resulting in a sleeker, more modern-looking weapon. The slide in particular, which looked like something from a 1940s-era handgun, became more monolithic and plain-looking—and in this case, plain was definitely better. The ribbed grip panels, which looked antiquated in the 1980s, were replaced with a more contemporary waffle pattern.