Yes, It Matters Whether or Not China Is Actually Capitalist 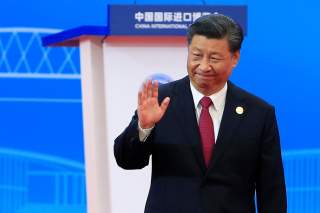 President Trump has railed against perceived socialism at home, but what about top-down, central planning elsewhere? Not so much. The recent China trade deal does nothing to nudge China away from its state capitalist model and toward market capitalism.

Maybe future trade deals will focus on rolling back Beijing’s subsidy-driven industrial policy. But that effort might have been made more difficult by the “phase one” agreement and its provision that China import an additional $200 billion of American-made goods and services before the end of 2021. The commitment “seems certain to strengthen Chinese state-owned enterprises and state control of the economy — the very policies the administration’s trade war supposedly sought to combat,” concludes a new analysis from the Peterson Institute for International Economics.

One big problem: Ongoing retaliatory tariffs on US goods, combined with lower tariffs on goods from other nations, means “China’s private companies now face strong disincentives to buy American exports,” according to the report. “By ignoring the Chinese private sector, Trump may expect Beijing to direct its SOEs to buy from American suppliers, instead of other sources where the tariffs are lower.” In short, more central planning, more state direction, more economic emphasis on SOEs rather than private firms.

There are good reasons for America to want China to be more capitalist. But what sort of capitalism? Preferably American-style capitalism, what economist Branko Milanovic calls “liberal meritocratic capitalism” in Capitalism, Alone. (Check out my podcast with him.)

Then again, more Scandinavian-style capitalism, or “social democratic capitalism” to Milanovic, would also be acceptable versus what China currently has.  And that’s “political capitalism,” which Milanovic describes as a socioeconomic system where a) powerful bureaucracy prioritizes economic growth since growth legitimizes the regime’s rule, b) absence of a binding rule of law, and c) autonomy of the state, including limits on the private sector to impose its preferences on government policy. Example: Beijing’s top-down Made in China: 2025 industrial policy system of state direction and subsidy.

A market economy rather than a state-led one would make China richer faster. Reuters recently reported, “Chinese productivity growth has gone into reverse for the first time since the Cultural Revolution tore the country apart in the 1970s, according to a new study, highlighting the failure of recent reforms to set China on a sustainable development path.” And as my AEI colleague Derek Scissors has noted, “Beijing has long abandoned the pro-market path and shows no true interest in returning to it.”

And there’s a reason for that. A market economy can help nudge a country toward liberal democracy and away from single-party authoritarianism. As one political scientist has put it, “The freedom to consume, the freedom to move, and the freedom to complain may not substitute for true political freedom, but they are nonetheless important in themselves.” And the European think tank Bruegel points out that a market economy “makes citizens economically independent from the government which, unlike in a centrally planned economy, is not the single owner and employer … limits power of government bureaucracy and creates room not only for economic freedom but also for civil liberties … helps a country’s external openness … creates demand for the rule of law.”

America should want a freer, more democratic China — both in terms of political and economic freedom. It would make for a more peaceful and prosperous world. Trade policy that promotes a reversal away from political or state capitalism should be part of that effort, or at least doesn’t encourage it. That should be the core reason for attacking China’s current economic model, more so than perceived unfairness or concerns that Beijing’s genius planners have discovered a superior way to push forward the technological frontier.

This article by James Pethokoukis first appeared in 2020 on the AEI Ideas blog.