Yes, Mossberg MC1 Pistol Is Amazing. History Tells Us Why. 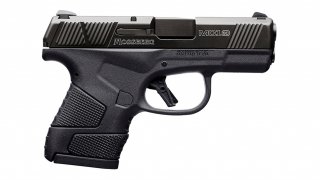 When O.F. Mossberg & Sons, Inc won the 2020 NRA Gold Bullseye Award for its Mossberg MC1pistol this past April, it may have come as a surprise to many shooters—because for the past century the company has been known for its shotguns. But in fact, when the company was founded in 1919 by Swedish immigrant Oscar Frederick Mossberg and after World War I, its first product was a handgun, not a shotgun.

"Mossberg opened its doors in 1919 with the introduction of its first firearm, the Brownie, a 22-caliber pocket pistol," said John MacLellan, vice president of sales and marketing at the company.

The Brownie was a four-shot, .22LR pistol that was similar in design to a derringer or pepperbox and it was produced by the company from 1920 to 1932. It was just the beginning for the company that has been known for its high-quality shotguns.

The Swedish-born Mossberg had immigrated to the United States in 1886 and worked for a number of firearms makers over the years. In 1914 he and his sons moved to New Haven, Connecticut to work at Marlin-Rockwell, a firm that had been contracted to make weapons for the U.S. military. When World War I ended that company went out of business and Mosserberg and his two sons branched out and started a firm that one hundred years later remains the oldest family-owned firearms manufacturer in America.

The Mossberg 500 Series of pump-action shotguns has earned the distinction of being one of the most-produced sporting firearms in the world, with more than ten million sold worldwide. Designed for the entry-level hunter and sportsman the 500 Series found a following as a home defense weapon, and thanks to its rugged design it has been adopted by the U.S. military and law enforcement.

The shotgun is “astoundingly reliable. It passed the MIL-Spec 3443 E test and it doesn’t rely on maintenance for reliability.” Additionally, “the Mossberg 500 is a high functioning shotgun, with a good balance between adaptability and consistency. It handles smoothly, and feeds, fires, and ejects without issues. The 500 has an infinite selection of aftermarket accessories and interchangeable barrels to allow complete customization, and you can switch the barrels easily.”

And last year the company had introduced its MC1sc, a subcompact, semiautomatic pistol chambered in 9x19 millimeter Parabellum—the first Mossberg handgun since the Brownie was introduced one hundred years earlier. The full-featured nine-millimeter concealed carry handgun was the result of three years of research and development.

“It’s a tremendous honor for our MC1sc pistol to be recognized with a 2020 Golden Bullseye Award in celebration of our commitment to engineering expertise and manufacturing excellence,” added MacLellan

While the firm now is handling some of its manufacturing in Turkey and some parts also come from Mexico, O. F. Mossberg & Sons still produces more than 90 percent of its shotguns and rifles at its facility in Eagle Pass, Texas.