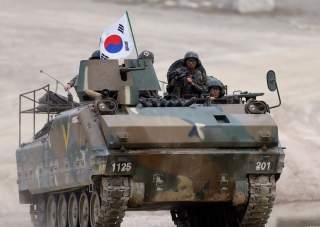 Key point: North Korea may have nuclear weapons but its conventional forces and economy are largely a joke. South Korea is much more powerful and advanced than North Korea.

One of the most baffling military standoffs in modern history is that between North and South Korea.

It’s a David vs. Goliath standoff where Goliath requires help from an even greater power and lacks the strategic focus to concentrate on his adversary.

The reality is that South Korea, with an economy nearly fifty times greater than the North’s, is more than capable of defending itself after a withdrawal of U.S. military forces.

In June 1950 North Korea, backed by the Soviet Union, invaded South Korea. A United Nations coalition, led by the United States, repelled the invasion and fought intervening Chinese forces to a standstill, with a cease-fire signed in 1953. U.S. forces have remained in South Korea ever since, a tripwire that guarantees U.S. intervention in case of further North Korean aggression even as the Cold War ended.

As U.S. forces sat garrisoned on the Korean DMZ to guard against a second attack, life went on in the rest of Asia. U.S. forces stationed in South Korea and Japan provided regional stability to allow economies across Asia to flourish, and today both countries are prosperous, democratic allies of the United States. South Korea, in particular, went from a largely agrarian country to a fully modern industrialized state, and today the country of just 50 million is the 12th largest economy in the world overall, a spectacular achievement by any measure. South Korea is a mid-sized state with a bustling economy nearly as large as Russia’s.

Meanwhile, in North Korea, the industrial north began slipping in the 1970s and never recovered. The end of the Cold War and economic support of the Soviet Union worsened Pyongyang’s economy, and in the mid-1990s a famine in the secretive country killed between 240,000 and 3.5 million people. Today North Korea is a small, impoverished state with a GDP smaller than the U.S. state of Delaware.

The contrast between the two countries couldn’t be starker. The Bank of Korea estimated that in 2017, North Korea’s economy was just 2.1 percent the size of South Korea’s, while Pyongyang’s per capita GDP was just 4.4 percent of Seoul’s. While South Korea does indeed have twice the population of North Korea, mismanagement, corruption, and poor economic decisions over the last half-century have dramatically reversed economic conditions and widened the gap between what is now the rich south and poor north.

The economic disparity between the two countries lies at the heart of the argument. Even assuming that South Korea must spend several times more than the North to contain the threat, Seoul should have more than enough economic means to do so. This is particularly true as the threat of a mechanized assault by the North recedes in the face of obsolete equipment, logistical challenges, and the general inability to mount an all-out attack.

U.S. forces on the Korean peninsula amount to four squadrons of F-16 and A-10s and an armored brigade, with regular visits by special operations and naval forces. While a potent force, this could easily be replaced by similar South Korean forces. Arguably, they are no longer needed to prevent a North Korean attack but instead provide a tripwire that would activate American involvement in any inter-Korean conflict.

Meanwhile, South Korea has made military decisions that are not in America’s national interest. Faced with the threat of hundreds of tactical ballistic missiles and artillery rockets, Seoul has invested in a thin layer of Patriot missile batteries with limited range. Seoul has resisted buying THAAD, instead relying on an American-manned THAAD unit. While the primary purpose of that unit is to protect American forces, it does cover a substantial amount of South Korea.

Other actions reflect a lack of focus on the primary threat--and the imagined state of another. South Korea’s construction of a blue water navy, while a natural step for a maritime power, is at the expense of anti-submarine warfare forces to counter North Korean submarines--soon to be armed with nuclear weapons that can devastate South Korea and beyond. Drills and measures to counter an imagined Japanese threat to the Dokdo islands--invasion by an avowed pacifist state-- is baffling and conducted at the expense of other, more urgent, threats.

South Korea is more than capable of handling the North Korean threat by itself. The South enjoys a combination of high technology, a strong economy, vibrant democracy, and the support of western countries with advanced military technology. North Korea has none of these things. While the U.S. stepping back from defending the Korean peninsula is an obvious goal of North Korea and a few other regional countries, that doesn’t necessarily make it wrong.

Sixty-six years of American military support for South Korea is a long time. At some point, U.S. military support must end, and the South having an economy fifty times larger than the North sounds is as good a time as any. If it not now, when?