Yes, the U.S. Navy Does Plan to Have a Massive 355 Ship Fleet 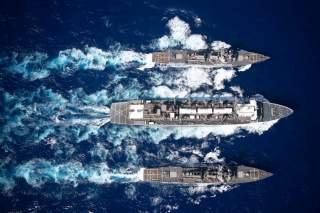 Key point: With so many major threats around the world, the Navy wants more ships to ensure it can handle every crisis.

The new destroyers under construction, along with the upcoming emergence of DDG-51 Flight III ships, make up a key component of the Navy's plan to reach an overall fleet size goal of 355 ships in coming years. The newest destroyers represent technically advanced warships able to fire new weapons, better detect enemy attacks and prepare for a highly contested future maritime threat environment.

The Navy hopes to enter an efficient, cost-saving multi-year contract initiative to build the first 10 Flight III ships; the first two of the new class of destroyers are now under contract. Huntington Ingalls Industries is building one called DDG 125, and Bath Iron Works is on contract to build DDG 126.

The Raytheon-built AN/SPY-6(V) radar is reported by developers to be 35-times more powerful than existing ship-based radar systems; the technology is widely regarded as being able to detect objects twice as far away at one-half the size of current tracking radar.The AN/SPY-6 radar, also called Air and Missile Defense Radar (AMDR), is engineered to simultaneously locate and discriminate multiple tracks.

Navy officials tell Warrior that AMDR has completed a System Functional Review for integration with the upgraded Aegis Baseline 10 radar and software systems. ​

This article originally appeared on Warrior Maven in February 2018.