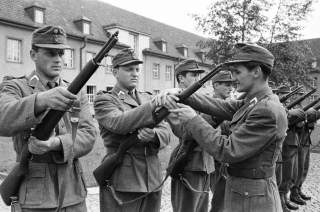 The World War II M1 Carbine was never actually meant to be a front-line infantry weapon. Rather, the U.S. Army had envisaged soldiers in support roles using the gun strictly for last-ditch, personal defense.

However, the light, handy carbine was popular with U.S. troops of all stripes, despite the weapon lacking the firepower of, say, the M1 Garand. By 1943, American soldiers across theaters were demanding a handier carbine version of the Garand.

In January 1944, the Infantry Board tested a shorter and lighter version of the Garand developed by the 93rd Infantry Division. The Board concluded that shortening the rifle did not impair its accuracy.

A prototype was ready for testing within a couple of months.

The prototype M1E5 featured a barrel that was just 18 inches long, down from the standard 24 inches — and also boasted an ingenious, folding, pantograph-style stock that attached via a rear metal cap.

The weapon’s overall length with the stock extended was 37.5 inches. It weighed 8.4 pounds. This was still longer and heavier than the 5.8-pound, 36-inch M1 Carbine was, but lighter and more compact than the 9.6-pound, 43.5-inch Garand was.

Initially, the M1E5 did not have a pistol grip — and instead featured a conventional, straight grip-stock profile. Testers at the Aberdeen Proving Grounds recommended adding a grip.

Both the stock and the added pistol grip folded forward. Interestingly the stock also had a provision for a rifle grenade sight, which attached to the fixed sight base.

While the shortened barrel didn’t negatively impact accuracy out to 300 yards, the weapon’s recoil, muzzle blast and flash greatly increased. It became clear that an additional muzzle break could mitigate these problems.

Revisions to the stock improved the weapon’s ergonomics and strength — especially when firing rifle grenades. However, the Springfield Armory suspended work on the Garand carbine shortly after finishing testing in late 1944. Springfield redirected its staff to focus on the select-fire T20 rifle then in development. The war ended before Springfield could revisit the carbine project.

Garand filed a patent protecting the stock design in June 1946, and the government granted it in February 1949. Springfield Armory only built one M1E5 prototype. It remains in the Armory’s collection.