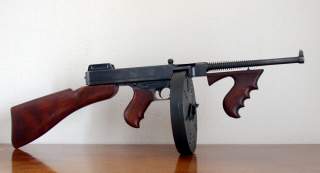 The company behind the venerable Thompson submachine gun, a favorite of both gangsters and GIs, is releasing a deluxe (semi-auto) version of the Tommy gun chambered in 9mm for public consumption.

Auto-Ordnance, the American weapons maker founded by former U.S. Army Ordnance Department chief Col. John T. Thompson just over a century ago, is offering up a Thompson 1927A-1 Lightweight “Deluxe Semi-Auto” chambered in 9mm, rather than the traditional .45 ACP for which the Tommy gun is better-known.

According to Guns.com, the deluxe interpretation of the Tommy gun is based on the Kahr Firearms Group’s reimagining of the classic design in the T5-9L20 Thompson, with a frame and receiver engineered from solid aluminum and buttstock and grips cut from solid American walnut. At 16.5 inches in the barrel and 41 inches overall, it’s a slick-looking piece of American engineering.

The 9mm design is “an original design by Thompson Auto-Ordnance in-house engineers, using the original Thompson platform,” the company announced. And for the price of $1,364, you can rock this deluxe Tommy gun with a 20-round stick magazine.