You Can't Stop the Eagle: Why the F-15X Will Dominate the Skies 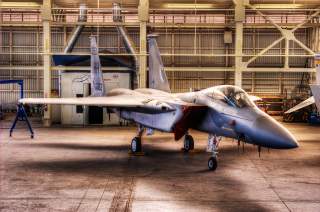 The F-15X’s weapons loadout would make it a beast in any “Beyond Visual Range” fight, and in the age of China’s anti-access/area denial strategy or A2/D2, BVR will be the name of the game in the opening phase of any hypothetical conflict in Asia.

The U.S. Air Force has been secretly organizing a plan to replace its F-15 C/D fleet with brand spanking new F-15X Eagle air superiority fighters, the Drive reported on Wednesday. This move could take the heat off of the service’s handful of F-22 Raptors or make up for F-35 shortcomings — and cushion the expenses involved in operating and maintaining two 5th-generation fighters.

Originally commissioned in the mid-’70s to take on Soviet hordes over the skies of Europe, the Eagle has become a staple in the warzones of the Middle East and Central Asia. The age of the Air Force’s 200-plus Eagle fighters has been a cause for concern — especially as they age faster than F-35s are getting operational.

The F-35 is a Swiss army knife of an aircraft, laden with stealth features and air-to-ground missions, making it a less capable dogfighter than the F-15 in close quarters. And if the F-35 is used as a stand-off missile-hauler, carrying a full complement of 16 air-to-air missiles on external pylons, it loses the stealth characteristics that make it so valuable (and pricey).

The F-15, on the other hand, is arguably the king of 4th-gen air to air fighters. Boeing has continued to refine the internal avionics of the Eagle, exporting upgraded variants to Israel, Saudi Arabia, and Qatar. The proposed F-15X would be able to hold 22 air-to-air missiles, and would slide right into the systems already in place to field and service the F-15 C/D fleet. The F-15X’s weapons loadout would make it a beast in any “Beyond Visual Range” fight, and in the age of China’s anti-access/area denial strategy or A2/D2, BVR will be the name of the game in the opening phase of any hypothetical conflict in Asia.

The F-15X will feature a new pylon system allowing it to handle heavier weapons loads, upgraded electronic warfare suites, an electronically scanned radar array, and even a sweet new multi-function sensor known as the “Legion Pod.” It will also feature the relatively low, low price of $27,000 per flight hour to fly, compared to the $35,000 it costs to fly the Raptor for an hour.

In the novel Ghost Fleet, reliance on 5th-gen fighters paints Uncle Sam into a corner when a war kicks off with China and Russia in the Pacific. In this nightmare scenario, the U.S. Air Force pulls retired F-15s out of bone-yards to supplement the skeleton fleet of F-22s and F-35s that survived the surprise attack.

Well, at least that’s one war scenario we can actually preempt now.