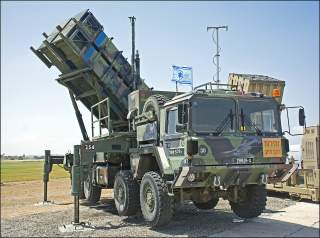 The United States began covertly supplying the Afghan rebels with Stinger missiles starting in 1986. Five hundred handheld launchers and 1,000 individual missiles were handed out “like lollipops” to the mujahedeen, and the first alleged loss to Stingers was on September 25th, 1986 when an Mi-8MT Hip helicopter operating out of Jalalabad was shot down. The Soviet Union lost nearly 270 aircraft between 1986 and 1989.

Claims of the effectiveness of the Stinger in theater range from about 4 percent to 70 percent. Whatever the case, the Soviet Air Force is known to have changed tactics, and the Soviet Army was often deprived of close air support and constricted in its ability to conduct helicopter operations.

One of the most famous missiles in the world, the U.S. Army’s Patriot missile rose to notoriety during the 1991 Gulf War, when it was used to protect Coalition forces and Israeli population centers from Saddam Hussein’s Scud missiles. Although lauded at the time as a great success, Patriot’s true success rate reportedly hovered in the single digits.

Since then, Patriot has been almost continuously improved and the result is a mature missile system capable of intercepting targets flying highly divergent flight profiles. Originally designed to defend only against aircraft, Patriot is now capable of engaging helicopters, cruise missiles, ballistic missiles and drones. Against ballistic missiles, Patriot is employed to intercept warheads in the terminal descent phase.

Patriot development has branched into two missiles. A patriot battery can control both types, in order to cover a spectrum of threats. PAC-2/GEM is capable of shooting down aircraft, cruise missiles and to a lesser extent, theater ballistic missiles. It is deployed four to a launcher. PAC-2/GEM has a range of seventy kilometers to a maximum altitude of 84,000 feet.

PAC-3 MSE is designed strictly toward shooting down ballistic missiles. PAC-3 MSE is also smaller, and a launcher can carry twelve missiles instead of four. The missile has a range of thirty-five kilometers and a maximum altitude of 112,000 feet.

Patriot was a product of the 1970s-80s, a period when battlefield missile defense was not seriously discussed, and was designed purely to intercept aircraft. Over time, Patriot has proven surprisingly adaptable. Despite failures in the 1991 Gulf War, during the 2003 invasion of Iraq, Patriot scored nine hits on nine Iraqi theater ballistic missiles.