You're Dead: These Are the Most Powerful Air Forces Ever to Fly 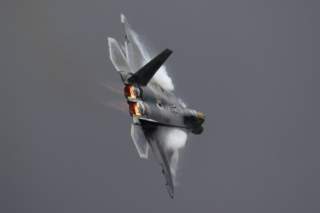 Armies and navies began taking advantage of lighter-than-air craft during the nineteenth century. In the Italo-Turkish War of 1911, the first heavier-than-air craft began dropping bombs on enemy positions. Only a few years later, massive bombers could take off from German-controlled airfields and drop their bombs on London, even as swarms of fighters and attack planes tangled over the Western Front.

Today, airpower plays a constitutive role in almost every conceivable military action. Military aviation, thus, has a short but consequential history. This article examines five organizations that have most effectively wielded airpower as tools of national strategy and survival.

On April 1, 1918, the British government combined the Royal Flying Corps (part of the British Army) and the Royal Naval Air Service (a component of the Royal Navy) into a single organization, the Royal Air Force. The RAF became the world’s first organizationally independent air force, untethered to the concerns of either land or sea commanders.

The Royal Air Force struggled for most of the 1920s and 1930s with its sister services for funding and relevance. These struggles left almost everyone worse off; British naval aviation in particular suffered, but the need to demonstrate political relevance left all of the services unprepared for the war that came in 1939. Nevertheless, the Fighter Command of the RAF performed brilliantly during the war, helping to defeat the German air campaign in the Battle of Britain, then supporting efforts to retake Nazi-held territory. Coastal Command devastated German coastal shipping while also helping to defeat the German submarine offensive in the Atlantic.

Since the end of the war the RAF has remained an important global force, supporting British and coalition military operations around the world. Although it no longer plays a meaningful strategic role (the last bombers retired decades ago), the fighter-bombers of the RAF continue to contribute to the defense of NATO.

The United States Air Force came into existence on September 18, 1947, taking the mantle of the United States Army Air Force, the U.S. Army Air Service, and the U.S. Army Signal Corps. Between 1941 and 1945, the USAAF provided the greater portion of the airpower that helped win victory against Japan, and especially Germany. Diversions into strategic bombing notwithstanding, the USAAF provided a critical part of the airpower that the Allies needed to win the war.

The immediate post-war saw destructive fights within the U.S. military establishment, but led to Air Force independence. Although a fixation on its strategic mission hamstrung the Air Force in Korea and Vietnam, it nevertheless played a key role in facilitating U.S. military operations in both conflicts. After Vietnam, the Air Force developed some of its most successful warplanes, including the F-15 Eagle, F-16 Viper, and A-10 Warthog.

Today, the U.S. Air Force in undoubtedly the most powerful air force on the planet. Its strike, logistical, and air superiority capabilities have enabled the United States to fight, at great advantage, anywhere in the world. Although questions abound about how the United States has decided to structure its airpower, the USAF remains the standard by which other air forces are judged.

The United States Navy first flew an aircraft from a warship in 1911, with a makeshift deck fastened to the cruiser USS Birmingham. Naval aviation grew substantially in the interwar period, taking advantage of the restrictions of the Washington Naval Treaty to build or convert half a dozen large aircraft carriers. The USN carrier program survived the inter-service conflicts that characterized interwar military aviation much more successfully than its British counterpart.

In World War II, U.S. naval aviators helped win the Battle of the Atlantic, protecting convoys from U-boats and destroying countless German submarines. In the Pacific, U.S. naval aviators froze the Japanese offensive in its tracks at Coral Sea, Midway, and Guadalcanal, and led the massive offensives of 1943 and 1944 that rolled back Japanese gains and brought the war to the home islands. At its height, the USN operated over a hundred carriers of various sizes, along with numerous floatplanes, land-based aircraft, and even a few strategic bombers dedicated to anti-submarine purposes.

USN naval aviation played important roles in all of the conflicts of the Cold War and post–Cold War, providing forward deployed military assets that could respond to crises on short notice. Today, the USN boasts one of the most powerful air forces in the world, capable of nearly every mission tasked to airpower. The ten nuclear aircraft carriers of the USN (along with eight light carriers) provide the most visible currency of American military power.

Like the USN, the Imperial Japanese Navy initiated its naval aviation program in the years before World War I. In 1922 the IJN acquired its first aircraft carrier (HIJMS Hosho, the world’s first purpose built aircraft carrier) and soon thereafter built and converted several additional carriers. The Japanese approach to naval aviation was characterized by a commitment to tactical and operational excellence; intense flight training provided the IJN with the best pilots in the world, while carefully developed operational doctrine unified the IJN’s carrier force into Kido Butai, a single, devastating tool of national power.

Behind the A6M “Zero” fighter, an aircraft that helped erase the distinction between land-based and carrier-based fighters, the pilots, planes, and aircraft carriers of the IJN dominated the Pacific Ocean for six months, putting the two largest navies in the world on the run. Japanese naval aviators destroyed the core of the U.S. Pacific Fleet, sinking five battleships and damaging three more. Three days later, land-based IJN bombers sank HMS Repulse and HMS Prince of Wales off Malaya. Kid Butai then chased the rest of the British Far Eastern Fleet deep into the Indian Ocean, carrying out major strikes from Columbo to Darwin that devastated the Royal Navy and the Royal Australian Navy.

In the end, the strengths of the IJN carrier fleet became its weaknesses. The intense demands of training made the recruitment of new pilots difficult. The destruction of four carriers at Midway reduced the devastating potential of Kido Butai. And U.S. aircraft and aviators steadily surpassed the Japanese, who lacked the time and resources to undertake innovative training, or build new advanced airframes. Japanese naval aviation effectively died at the Battle of Philippine Sea, where American flyers massacred their Japanese counterparts in what became known as “The Great Marianas Turkey Shoot.”

In the early 1930s, the Luftwaffe didn’t exist as an institutional entity. Memory of the bombings of London remained fresh in British minds, and the Treaty of Versailles established stark limits on German airpower. As part of Germany’s military breakout in the mid-1930s (tolerated in part because of Western concerns about the Soviet Union), the Nazi regime established the Luftwaffe in 1935 as the air service of the German military. It would only remain in existence for ten years, but during that period in helped change the map of Europe.

Within a few years, German engineers (with the strong support of the Nazi government) built one of the most effective air forces in history. After flirting with the possibility of building a strategic bombing force, the Luftwaffe wisely concentrated on the task of supporting the Wehrmacht, which helped enable the German army to conquer most of Europe. The Luftwaffe developed expertise in close air support, interdiction, and offensive counter-air operations that allowed it to establish air superiority over its foes and ease the path for Wehrmacht advances.

Later in the war, the Luftwaffe threw its fighters into combat against the lumbering four-engine bombers of the Combined Bomber Offensive, with dreadful casualties on both sides. Eventually, however, the greater resources of the Allies caught up with the Germans. The US, Britain, and eventually Russia outproduced the German aircraft industry, putting up more and better aircraft with better trained pilots. By the time Germany surrendered, the Luftwaffe had very nearly ceased to exist as an organized entity.

In the next few decades, the air forces of the People’s Liberation Army may emerge to displace some of these candidates. The growth in the size, power, and expertise of the Indian Air Force also makes it a potential breakout candidate, although we hope that neither China nor India will have great cause for throwing their air forces into full battle.

Robert Farley is an assistant professor at the Patterson School of Diplomacy and International Commerce at the University of Kentucky. His work includes military doctrine, national security, and maritime affairs. He blogs at Lawyers, Guns and Money and Information Dissemination and The Diplomat. Follow him on Twitter: @drfarls. This article first appeared several years ago.