You're Going to Die: 5 Ways China Can Go to War from the Sky (And Win a War) 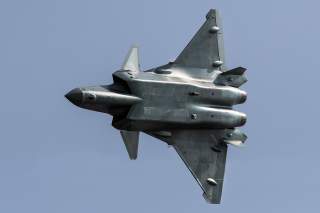 The People’s Liberation Army Air Force is no longer a peasant air force of ancient fighters incapable of projecting power beyond its borders. During the Cold War, there was no need for such an expensive force—or to fight a major war outside of China’s borders.

Now, as China’s economy has expanded at a staggering rate, China’s interests have grown beyond its borders, indeed even beyond its traditional area of interest in East Asia to a truly global scope. A Chinese air force is emerging that is capable of acting in support of those interests, capable of challenging longstanding powers such as the United States and Japan.

China’s youthful aerospace industry is churning a dizzying array of weapons systems. From slow, low-flying cruise missiles to hypersonic vehicles that rip through the sky at Mach 5, from bombers based on sixty year old designs to advanced, fifth generation combat planes, China’s air forces have made the great aeronautical leap forward.

China is actively conducting research and development into hypersonic weapons. Hypersonics are a new type of weapons system capable of delivering a payload or vehicle at speeds between Mach 5 and 10, or 3,840 to 7,680 miles an hour. Hypersonic weapons are extremely fast and difficult to shoot down.

On August 7th of this year China conducted a second test of the WU-14 Boost Glide Hypersonic Glide Vehicle (HGV). The test, conducted from the Taiyuan Satellite Launch Center in Shanxi province, literally fell short of expectations—that is to say, near the Bulong Hu Hotsprings Resort in Inner Mongolia.

The test failure is not exactly unexpected—due to the extreme stresses of flight at hypersonic speeds, those researching hypersonics—including the United States—are experiencing a high rate of failures testing hypersonic systems. It did, however, come on the heels of a successful January 9th test, also launched from Taiyuan.

China’s recent tests have involved using the so-called “boost glide” method to get to hypersonic speeds. The weapon is boosted high into the atmosphere by a rocket or repurposed ballistic missile and glides back to Earth at hypersonic speeds. The kinetic energy of the glide vehicle is such that an explosive payload can be considered optional.

Hypersonic weapons have a variety of advantages. The sheer speed of a hypersonic means it can travel farther faster, delivering its payload within minutes of launch. Hypersonics are difficult to shoot down with current air defense systems and can also use their speed to get inside the decision cycle of an adversary, striking their targets before a foreign government can effectively respond to them.

Prior to the January 9th test China was known to have a hypersonic program, but little was known about what direction it was taking. The use of a liquid-fueled booster rocket—inferred from the August 7th test—possibly suggests that China intends to use the WU-14 to deliver nuclear weapons.

The KJ-2000 is China’s main airborne early warning and control aircraft. Like the American E-3 Sentry, the KJ-2000 is a large, wide-bodied aircraft with a rotating disc-shaped radar mounted on top, capable of detecting aircraft at more than 300 miles.

Airborne early warning and control aircraft are essential for modern air forces operating in tense regions, those with large amounts of airspace to defend, or those expeditionary in nature. In the case of China, KJ-2000 can be used to expand China’s surveillance network beyond the range of ground-based radars into areas such as the South and East China Seas.

People’s Liberation Army Air Force pilots are well known for relying on ground controllers for guidance. As China’s air operations move farther from shore and away from ground radar stations aircraft such as the KJ-2000 will be necessary to provide direction to fighters. KJ-2000 aircraft have been sent into China’s new Air Defense Identification Zone near the Senkaku islands.

The shortage of AEW&C aircraft seriously limits the China’s ability to sustain aerial operations over the South and East China Seas. If the PLAAF wants to be able to conduct large scale, high tempo operations for prolonged periods of time , it will need many more of these aircraft.

The H-6 Bomber is China’s first -- and so far only -- heavy bomber. Originally built under license from the Soviet Union in the late 1950s, the original design is long since obsolete. China has H-6 has continually updated the airframe to keep it useful and even assigned it new roles.

Designed to drop nuclear free-fall bombs, the lack of alternative airframes has meant the H-6 bomber has grown into other roles, including conventional bomber, missile carrier, and even aerial refueling tanker. The PLAAF is thought to have roughly 80 H-6s in the role of nuclear bomber and cruise missile carrier, and 10 as aerial refueling aircraft. The People’s Liberation Army Navy Air Force, the air arm of the Chinese Navy,  has about 30 H-6s for use in the reconnaissance and anti-ship role, where they are armed with YJ-83 “Eagle Strike” anti-ship missiles.

The H-6’s two most useful attributes are its long range and large payload. The best use of the H-6’s attributes is in its ability to carry up to six CJ-10 long-range cruise missiles. The H-6/CJ-10 combination is designed to provide China with a long-range, precision strike capability against targets on the ground.

A replacement for the H-6 is thought to be under development, if only because the H-6 airframe’s potential has pretty much been taken to the limit. The replacement, nicknamed “H-X” by Chinese military watchers, will almost certainly be a stealthy bomber platform with a midair refueling capability.

For decades after the revolution, China expected any war to be fought in the skies over China itself with short-range fighters. As a result, the capability to refuel military aircraft in mid-air has not been a priority for China.

Now, as China presses old territorial claims on its periphery it has to start sending fighters sending its fighters greater distances. Islands such as the Diaoyu/Senkaku Islands in the East China Sea or the Spratlys in the South China Sea are just out of range of land-based aircraft. The distance from China’s air bases on Hainan Island to the contested Spratly islands is 670 miles, or just under twice the combat radius of the J-10 fighter. Other than an aircraft carrier like the Liaoning, the only way Chinese fighters can reach these islands is with aerial refueling tankers like the Il-78.

The Il-78 is a Russian Il-76 cargo aircraft converted to aerial tanker, and carries enough fuel to fill the tanks of a J-10 fighter 20 times over. Trailing three long refueling hoses behind it, the Il-78 can refuel three fighters in midair at once. Although it can refuel more aircraft at once than the American KC-10, it carries less fuel internally.

China has an estimated eight Il-78 tankers but is having trouble procuring more. It has signed deals for more Il-76 cargo planes, likely with an eye towards converting them to tankers, but production issues in Russia have meant only a handful of Il-76s have been delivered. An alternative would be to procure a tanker variant of the Xian Y-20 strategic transport, but the Y-20 is still under development. Until China addresses its tanker shortfall, the PLAAF’s ability to back Chinese territorial claims in nearby waters will be limited.

China’s cruise missile capability has been developed under a cloak of secrecy and disinformation, and even now not much is known about Chinese cruise missiles. The Chinese Dong Hai-10, or “East Sea 10” cruise missile has been under development for decades, and may have benefitted from recovered Tomahawk missile technology.

The DH-10 is thought to bear a strong resemblance to the American Tomahawk cruise missile with a bulb nose, a pair of stubby wings, and a turbojet engine. The U.S. Department of Defense estimates the DH-10’s range to be approximately 941 miles, about as far as the latest version of the Tomahawk, Block IV-E.

The DH-10 is believed to rely on several navigation systems, inertial, terrain contour matching, and satellite navigation. The latest version of the DH-10, the DH-10A or sometimes referred to as the CJ-10, is estimated to be accurate to less than ten meters thanks to satellite guidance. Warhead size is probably somewhere within 1,000 pounds.