You're So Dead: The Marines and Army Now Have Anti-Ship Missiles 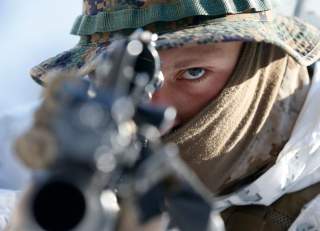 Key point: Washington wants to ensure it can sink enemy warships even when its own Navy is unable to fight back. That means having mobile land units armed with anti-ship weapons.

With the Chinese and Russian fleets fielding more and better ships and missiles and the U.S. Navy struggling to grow its own fleet, it’s time for American ground troops to contribute to naval battles, 1st Lt. Walker Mills argued in Proceedings, the professional journal of the U.S. Naval Institute.

“Both the Marine Corps and the Army need to rapidly develop and deploy redundant land-based capabilities to strike ships in the littoral, as well as concepts for their employment,” Mills wrote.

The Army and Marines clearly agree with Mills’s assessment. "There’s a ground component to the maritime fight," Gen. Robert Neller, the outgoing Marine Corps commandant, said at a February 2019 conference in San Diego.

Marine and Army units with anti-ship missiles could spread out across islands in order to control strategic ocean checkpoints. "So there’s a lot of geographical chokepoints, and you know what they are, and the potential adversaries know what they are," Neller said. "So if you get there first and you can control that space, then you have an operational advantage."

The hardware slowly is coming. Both the Army and Marines in recent years have experimented with ground-launched anti-ship missiles.

The Army in a 2018 war game in Hawaii fired a truck-mounted Naval Strike Missile at a target vessel. During the same event, an Army HIMARS battery struck the decommissioned U.S. Navy amphibious ship Racine with five unguided 227-millimeter-diameter rockets. An aerial drone provided the coordinates for the 50-mile strike.

The Marines are buying a small number of the 900-pound NSMs to go with their wheeled High Mobility Artillery Rocket System launchers. Fighter jets could help the Marine missile batteries to locate targets. In a 2018 demonstration in Arizona, an F-35 stealth fighter detected a test target and transmitted the target's location to a HIMARS battery.

But the U.S. ground-combat branches “are far behind U.S. adversaries as well as allies in land-based anti-ship fires,” Mills warned.

There’s a good reason the rest of the world favors land-based anti-ship weaponry. “Land-based fires are a cheap alternative to buying more frigates, destroyers and aircraft,” Mills wrote. “They can be more easily hidden and distributed than sea-based fires but pack the same punch. They also are more survivable—you cannot sink the parking lot or the motor pool.”

There’s precedent for equipping the U.S. land services with anti-ship weaponry. The Army maintained coastal-defense artillery batteries as recently as the 1950s. The Marine Corps “reorganized, converted, or abolished all 19 Marine Defense Battalions in 1944,” Mills noted.

“Initially organized with five-inch naval guns, these battalions saw action almost everywhere in the Pacific but proved most critical in early defensive actions, such as the Battle of Wake Island. In that instance, Marine gunners sank a Japanese destroyer—the first Japanese ship sunk by U.S. forces during the war—and managed to hold off an invasion for 15 days. As the war progressed, however, the battalions increasingly shifted toward an anti-aircraft role.”

A modern version of these forces could operate HIMARS launchers with various compatible anti-ship missiles. The benefits to U.S. maritime strategy would be immediate, Mills claimed.

Land-based anti-ship missile systems are an effective tool in countering maritime aggression, and this is being increasingly recognized inside and outside the force. ... Employing these systems in the littorals of the western Pacific would disrupt current adversary investments and strategy.

The Army and Marine Corps must continue to invest in and prioritize long-range anti-ship fires for littoral operations so they can support the Navy in sea-control and sea-denial missions. The services need to work together—the Marine Corps has extensive experience in naval operations, but the Army has a much larger and more robust fires complex, as well as more resources for acquisition and development.

Concurrently, Marines and soldiers need to drive forward the discussion on how these new systems should be employed. Land-based anti-ship fires are exactly the type of cross-domain capability the joint force needs to fight and win a high-end conflict in a littoral environment.