You're Toast: 5 Ways A Bulletproof Vest Can Be Defeated 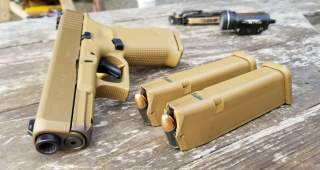 Body armor protects against kinetic energy weapons that seek to deliver fatal wounds against friendly troops. Body armor can also be a Maginot Line, bypassed and made irrelevant. Artillery, including howitzers and mortars, and improvised explosive devices could batter troops wearing body armor.

At some point all body armor fails to protect a target from a sufficiently large (and powerful) round. Generally speaking, a larger bullet transfers more energy to the target. Today’s military ballistic helmets are rated to stop large-caliber pistol rounds and shrapnel but are unable to stop rifle rounds—a helmet capable of stopping rifle rounds would be too heavy and uncomfortable. The easiest way to overmatch a helmet rated to stop 9mm ammunition (typically 330 or more foot pounds of energy) is to target it with a 5.56mm carbine round (1,300 foot pounds of energy.)

The most obvious way to penetrate bullet proof armor is to field armor piercing bullets. The U.S. Army, concerned that current 5.56mm ammunition is insufficient to pierce body armor at combat ranges, has invented the XM1158 7.62mm Advanced Armor Piercing (ADVAP) round. ADVAP penetrates armor by using a heavy tungsten core penetrator. The combination of weight and velocity—and ideally a dart-like tip—could penetrate the weave of Kevlar and enable the round to defeat other armors, including steel. The XM1158 as envisioned would be issued to soldiers carrying M240 machine guns and larger battle rifles that would replace M4A1 carbines in select frontline units.

A technological wild card is the use of lasers to penetrate body armor. A short, intense pulse of focused light, lasers can burn through most objects, though their penetration abilities are greatly dependent on power, duration and local atmospheric conditions. Shortcomings in power storage and generation technology make it unlikely we’ll see laser pistols, carbines, and light machine guns anytime soon, but vehicle mounted lasers are already seeing deployment at a limited scale. Although lasers could probably burn through most body armor fairly easily they would have a problem similar to that of flechettes: a laser would only create a wound channel the same diameter as the beam itself.