YouTube TV Has a Big Problem: No MTV, Nickelodeon or Comedy Central 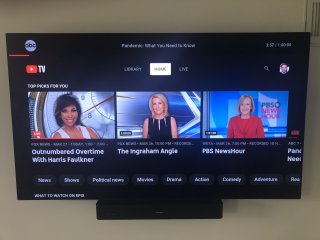 YouTube TV has been available nationally since early 2019, following a couple of years of availability in some markets. The Google-owned service allows users to get most of the channels they want without having to pay a cable company, or depend entirely on Netflix, Hulu, Amazon and other traditional streaming services.

But some people signing up for YouTube TV have noticed something: There's a package of channels, including MTV, Nickelodeon, Comedy Central, their various sister channels and others, that are not available on the service. This is also the case with Hulu with Live TV, a top competitor of YouTube TV.

USA Today reported in early 2019 that at the time of YouTube TV's national launch, the service's channel lineup had "two big omissions” — the Discovery Networks, and the Viacom-owned MTV and Nickelodeon channels. The Discovery offerings-including Discovery Channel, Food Network, HGTV, TLC and others- landed on the service last April, but the Viacom networks are still missing.

There hasn't been much reporting about the exact nature of the dispute, but the explanation seems to be that YouTube has been able to reach agreements to carry all of the other major cable channels, but has reached no such agreement with Viacom. Viacom's CFO said in an interview in 2018, prior to the national launch, that the company was in negotiations, and expected to get its channels on to Hulu and YouTube TV. But no such deal has happened to date.

The Nickelodeon and MTV channels are part of what was once called the MTV Networks Group. The corporate history is complicated and convoluted, but at one point the MTV Networks and CBS were both under the umbrella of Viacom, following a merger in 1999.  In 2006, they split into separate companies, with CBS, Showtime and other assets becoming part of CBS Corporation, and the MTV networks becoming part of a new Viacom. But then, last August, the two companies merged once again, into ViacomCBS.

YouTube TV does offer CBS and Showtime, which are part of the CBS "side" of Viacom. The company also owns streaming services CBS All Access and Showtime, plus the free streaming channel Pluto TV.

There was also a billion-dollar lawsuit, Viacom International, Inc. v. YouTube, Inc., filed in 2010 and settled in 2014, in which Viacom sued YouTube for copyright infringement. It’s unclear if that has anything to do with the YouTube TV dispute.

For subscribers, there are a couple of ways around the lack of channels. On the YouTubeTV subreddit, some participants suggest YouTube TV subscribers also subscribe to Philo, a $20/month streaming service partly owned by ViacomCBS, that offers all of the MTV networks. The combined outlay for the two services is still lower than most cable bills.

In addition, ViacomCBS owns Pluto TV, a free, ad-supported streaming channel available on Roku, Apple TV and elsewhere, which features a great deal of content from MTV, Nickelodeon and other Viacom properties. Pluto TV doesn't offer first-run episodes, but for YouTube TV subscribers whose kids are looking for Nick shows, it offers plenty of that, including a dedicated channel just for Dora the Explorer.