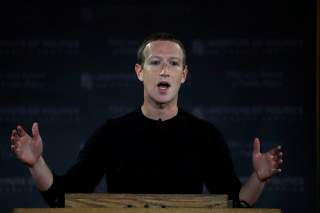 Facebook CEO Mark Zuckerberg pushed back Thursday against critics who believe his company’s new advertisement policies will allow politicians to lie and misinform voters ahead of the election.

Zuckerberg defended the new ad policy, which largely exempts politicians from Facebook’s fact checkers, during an interview with The Washington Post, telling reporters that Americans probably don’t want a company being the arbiter of what is fact and what is lie.

“People worry, and I worry deeply, too, about an erosion of truth,” he said ahead of a speech at Georgetown University. “I don’t think people want to live in a world where you can only say things that tech companies decide are 100 percent true.”

Facebook’s critics laid into the big tech billionaire after the social media platform decided in September to exempt politicians like President Donald Trump from a fact-checkers’ gavel. Media pundits believe the change will cause a dramatically uptick in misinformation across the internet.

Other Facebook executives have made similar free speech arguments.

Nick Clegg, the company’s vice president of global affairs and communication, said in a Sept. 24 blog post that Facebook will treat speech from politicians “as newsworthy content that should, as a general rule, be seen and heard.”

There will also be exceptions, as Facebook’s blog post notes: “Where speech endangers people; and where we take money, which is why we have more stringent rules on advertising than we do for ordinary speech and rhetoric.” Zuckerberg took Clegg’s point a step further during the WaPo interview.

Zuckerberg warned that Facebook could be perceived as “potentially cracking down too much.” He also called on government regulators to craft tailored rules to help moderate political speech online. Democrats and various liberal journalists are pushing back on Facebook’s philosophical positioning.

“Facebook changed their ads policy to allow politicians to run ads with known lies — explicitly turning the platform into a disinformation-for-profit machine. This week, we decided to see just how far it goes,” Sen. Elizabeth Warren said in an Oct. 12 tweet.

The Massachusetts Democrat added a screenshot of the ad, which claimed Facebook and Zuckerberg are endorsing Trump, who frequently criticizes the company for censoring conservatives. Warren, who’s running for president, clarified that the ad was designed to show how easily it is to promote false information on the platform.