Zuckerberg Opens Up: What Did He Discuss With Trump Over Dinner? 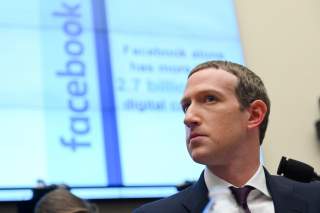 Facebook CEO Mark Zuckerberg talked to CBS about reports suggesting he had a private dinner with President Donald Trump while the tech company discussed how to handle political ads.

Zuckerberg talked to “CBS This Morning” co-host Gayle King about his decision to exempt select political ads from fact checkers’ gavels even as other tech companies are clamping down on similar content, the network reported Monday. He also discussed his previously undisclosed October meeting with Trump.

“Sure. I mean … we talked about a number of things that were — that were on his mind,” Zuckerberg said in response to King’s question about the nature of the dinner. “And — and some of the topics that you’d read about in the news around — around our work.”

King moved on to a stickier question. “Did he try to lobby you in any way?” she asked at one point.

“No. I mean, I don’t think that that’s — that — I think some of the stuff that people talk about or think gets discussed and these discussions are not really how — how that works. … I also want to respect that it was a private dinner and … private discussion,” Zuckerberg said.

Zuckerberg, who became a billionaire after founding Facebook in 2004, also doubled down on his decision to exempt politicians from Facebook’s fact checkers. He said such an exemption was designed to protect free speech in the digital sphere.

“Well, this is a clearly a very complex issue, and a lot of people have — have a lot of different opinions,” Zuckerberg noted. “At the end of the day, I just think that in a democracy, people should be able to see for themselves what politicians are saying.”

The dinner meeting and the ad policy come after reports showed in September that the Department of Justice is preparing an anti-trust investigation targeting Facebook. The company is also facing probes from the Federal Trade Commission and state attorneys general.

The White House has not responded to the Daily Caller News Foundation’s questions regarding the meeting.