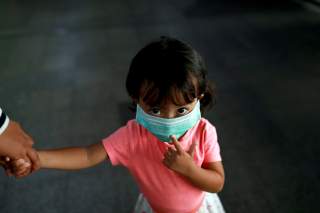 China's Great Firewall -- the website restrictions that turn the Chinese internet into more of a national intranet -- prevents Chinese browsers from accessing Google, Facebook, Twitter, YouTube, Instagram, Snapchat, you name it. Most Western news and opinion websites are blocked. The National Interest sure is blocked.

Consumer advice website Comparitech offers a nifty testing service that lets you see just what is blocked in China and where, with servers testing access at five different locations across the country. Comparitech is, of course, blocked in China. Circle of life.

The Great Firewall can't keep news from leaking out of China, and it's not clear how good it is at stopping news from leaking in. Much more effective at controlling the conversation is China's development of "national champion" netware. You may scoop a second-hand copy of the Wall Street Journal out of a US embassy recycling bin, but if you try to tell anyone what you read, good luck.

If blocking the news is a blunt instrument, preventing its being shared is a fine art. Netware providers like WeChat (messaging), Sina Weibo (microblogging), and Youku (video hosting) are all monitored by government censors. Even more effectively, they monitor themselves.

If you're frustrated by the idea that Facebook, Twitter, and YouTube have "community standards" that limit what you're able to share on their platforms, don't even think about China. American netware companies may sometimes get annoyingly political, but at least their policies are ultimately driven by commercial considerations. China's netware platforms are directly beholden to the government -- and the Communist Party.

And so when Wuhan ophthalmologist Dr. Li Wenliang privately warned friends on WeChat of an unusual cluster of SARS-like cases last December, he was pulled in for questioning by the police. So much for private messages. Tragically, Dr. Li died early this morning, February 7 in China, at just 33 years old. He was a victim of the coronavirus he attempted to warn others about.

There was no blocking that news on Weibo; some stories are too big even for China's notoriously zealous censors. Chinese netizens must also be aware that most of the world's airlines have stopped flying to China, and that they are, in effect, caught in a 1.4 billion person quarantine. How they think about that, though, is ripe for official exploitation.

China's twenty-first-century propagandists can't easily write the news the way their twentieth-century forebears could, but they can more effectively shape it. Criticism of the government's handling of the coronavirus outbreak can be muted, while criticism of foreign governments' travel bans is amplified.

One favorite Chinese propaganda tactic is to compare the coronavirus death toll to American deaths from seasonal flu. Another is to link flight suspensions to the U.S.-China trade war. And inevitably, patriotic Chinese netizens roll out accusations of racism -- and have their charges amplified by official endorsement.

Opinions like these can be (and are) shared on Western social media, but they don't get very far, because commercially-driven netware optimization algorithms correctly determine that most people aren't very interested to hear them. But in China, where the propagation of opinions on social media platforms is more influenced by official ideology than commercial considerations, baseless charges of Western racism are amplified and spread.

We all live in social media bubbles. That's a fact of contemporary online life. But while we worry about how netware may polarize public opinion, China is using netware to shape it. When it comes to politics, that's a problem, but probably a manageable one. When it comes to public health, it just might cost you your life.