Can Zelensky's Turn to Populism to Save Him in the Next Ukrainian Election? 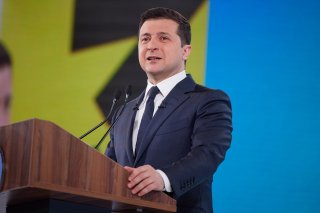 Populism has always been prominent in Ukrainian politics as a means to stem the declining popularity of presidents and governments. After the Orange Revolution populist firebrand Yulia Tymoshenko became synonymous with this populism. Ukrainian President Volodymyr Zelensky’s new policy of ‘de-oligarchization’ looks to return to Tymoshenko’s discredited populism which was disastrous for Ukraine’s economy during her two governments.

With forty-two percent of Ukrainians disappointed in Volodymyr Zelensky’s performance last year and sixty-seven percent believing the country is heading in the wrong direction, it is not surprising Ukraine’s president is turning to populism. Only twenty percent believed Zelensky’s presidency was better than his predecessor Petro Poroshenko, thirty percent thought he was worse while forty-one percent were of the opinion there was no difference between the two.

The traditional populist enemy in Ukraine has always been oligarchs. During election campaigns, all Ukraine’s political forces, ranging from left to right and irrespective of whether they are pro-Western or pro-Russian, promise to ‘deal with oligarchs.’

With one eye towards the next elections, Zelensky has launched a ‘de-oligarchization campaign’ with two enemies in his sights. The first is the pro-Russian Opposition Platform For Life Party who he sees as the main competitor to his own Servant of the People Party among Russian speakers in southeast Ukraine. The second is Poroshenko against whom he has a personal grudge and seeks to dampen support for the center-right European Solidarity Party that the former president heads.

While the Ukrainian public traditionally blames oligarchs for all manner of sins they at the same time remain skeptical about Zelensky’s motives, with only 31.5%  believing he is striving for justice or that ‘de-oligarchization’ will lead to improvements. Meanwhile over half of Ukrainians — fifty-seven percent — see Zelenskyy’s ‘de-oligarchization’ as either populism to increase his popularity ratings or an attempt to take over oligarch economic assets and media for the president's team.

Three political parties in parliament – European Solidarity, Voice, and Tymoshenko's Fatherland – who are not usually willing to cooperate with each other have drawn up their own alternative law on ‘de-oligarchization’ which they submitted on June 15, thirteen days after Zelenskyy’s draft. Their draft with the long title of ‘On De-oligarchization, Promotion of Competition, Removal of the Authorities from Corrupt Influences and Social Responsibility of Business’ seeks to deal with the many inconsistencies in the president's approach.

Zelensky’s ‘de-oligarchization’ is unclear about how oligarchs are to be defined and the names are restricted to a secret list of thirteen people who allegedly have inordinate influence in politics, the media, and over state officials. Zelensky seeks to remove the influence of these thirteen oligarchs over the media and political parties and deny them access to privatization of large facilities.

It is never explained how oligarchs would be forced to sell their media outlets. This would likely lead to protests in international organizations and human rights bodies about threats to media freedom in Ukraine. Similarly, with a huge shadow economy accounting for upwards of half of GDP and assets deposited overseas, Zelensky has not explained how the authorities intend to end the covert funding of political parties by big business. Big business after all provides financial donations to political parties in the US and Europe.

Indeed, it is perhaps not surprising Zelensky’s ‘de-oligarchization’ populism ignores Ukraine’s huge shadow economy as attempts to reduce its size would be unpopular among his base. Anti-establishment populists like Zelensky prefer to attack ‘elites’. The shadow economy contributes to widespread lower levels of corruption and widespread disrespect for the rule of law. Of the thirty million ‘economically active’ Ukrainians only 37 percent (10.9 million) pay taxes. 11.8 million Ukrainians who are able to work do not officially make any money; in other words, they work in the shadow economy where they earn unofficial salaries. Compounding this are high rates of tax avoidance in western Ukraine which does not see this as a contradiction in its claim to be the most patriotic region of the country. Tax avoidance is also high in the port city of Odesa and to a lesser degree in the capital city of Kyiv.

Ukraine’s largest industrial companies are too big and visible to hide in the shadow economy. Meanwhile ‘de-oligarchization’ does nothing to improve Ukraine’s rule of law by, for example, reducing widespread corruption in the judiciary. As the conservative Heritage Foundation noted in its 2021 Index of Economic Freedom, ‘[Kyiv] needs to boost investor confidence by continuing to upgrade the investment code and by undertaking deep and comprehensive reforms to strengthen rule-of-law institutions and improve the protection of property rights, judicial effectiveness, and government integrity.’

Zelensky’s populist ‘de-oligarchization’ plans higher taxes on selective oligarchs who own Ukraine’s largest natural resources companies. These include a potential tripling of iron ore mining rent and as much as a three-fold increase in taxing the disposal of non-hazardous mining waste.  The government’s own official statistics show sixty percent of iron ore mined in Ukraine is exported while the Ukrainian metallurgical industry contributes twelve percent of the country’s GDP.  19 of Ukraine’s top 100 taxpayers are in the metallurgical sector. A recent survey estimated each job in Ukraine’s metallurgical industry has a knock-on effect in creating a further 2.2 jobs in other sectors of the economy, such as transportation or engineering.

As tax increases will lead to increases in production costs for Ukraine’s metallurgical sector and price increases for importers of Ukrainian metals, Zelenskyy’s populist higher taxes will create a window of opportunity for  Russian competitors. Populist ‘de-oligarchization’ would encourage importers and investors to seek sector stability elsewhere, particularly in the three quarters of the world’s metals market which uses a fixed rent rate rather than the progressive rate favored by Zelenskyy. Populist tax increases will encourage some of Ukraine’s trading partners to move their business to, for example, Russia, the EU, Australia, or Brazil.

There has been substantially increased demand from China for iron ore.  But an increase in prices for Ukraine’s exports (due to populist higher taxes) would lead to Chinese importers looking for suppliers elsewhere.  Should China turn to Russia to meet its iron ore needs, Zelensky’s ‘de-oligarchization’ would not only drive down demand for Ukraine’s commodities and make post-covid economic recovery difficult but would also drive market share to Russia.

Who stands to benefit from Zelenskyy’s election populism?

‘De-oligarchization’ will benefit oligarch Igor Kolomoysky who was instrumental in bringing Zelensky to power in 2019 and remains untouchable. Oligarchs close to Tymoshenko were also untouchable during her populist ‘de-oligarchization.’ Zelensky has never once in his two years in power criticized Kolomoysky even though the oligarch has opposed all of his reforms. Kolomoysky controls a quarter of Zelenskyy’s Servant of the People parliamentary faction which has blocked government reforms. Kolomoysky directly interferes in Ukrainian politics through his For the Future political party which came fourth with twelve percent of the vote in last year’s local elections.

Kolomoysky faces numerous lawsuits abroad but none at home where the Zelenskyy controlled prosecutor’s office has initiated no criminal cases. In August 2020, the FBI raided companies owned by Kolomoysky in Cleveland and Miami and seized properties in Kentucky and Texas. On March 5, 2021, the U.S. sanctioned Kolomoysky ‘due to his involvement in significant corruption.’

To ingratiate himself with President Joe Biden, Zelensky could follow through with Ukrainian sanctions against Kolomoysky, although this is unlikely. Ukrainian gas oligarch Dmytro Firtash, who the U.S. has been seeking to extradite since 2014 from Vienna on corruption charges, was sanctioned by Zelensky last week. President Biden told Zelensky after this month’s NATO summit that Ukraine has to clean up its corruption to be invited into a Membership Action Plan (MAP). Cleaning up President Zelensky’s inner circle would be a very good place to start Ukraine’s drive to enter a MAP as a stepping stone to joining NATO.

Ukrainians' fear that ‘de-oligarchization’ will benefit Zelensky’s circle seems, therefore. to be true. Kolomoysky would certainly attempt to take over large companies which went bankrupt from populist high taxes and loss of markets.  It is interesting to note the manganese ore sector, already controlled by Kolomoysky, faced a mere twenty-five percent tax rate since 2020 at which time iron ore taxes increased to fifty percent.  Inexplicably, manganese ore escaped any tax increase in Zelenskyy’s populist tax hikes.

Zelenskyy’s populist ‘de-oligarchization’ has four fundamental problems. Firstly, it is poorly thought out because it is more geared to increasing the president’s popularity than undertaking any real change of the type long demanded by the U.S. in return for its support. Secondly, selectively targeting one of the key sectors of Ukraine’s economic growth and exports will only incentivize more companies to join the already large shadow economy. Thirdly, allowing Russia to take over Ukraine’s export markets would be unwise when nearly three quarters of Ukrainians believe their country is at war with Russia. Fourthly, Zelensky’s ‘de-oligarchization’ will benefit Kolomoysky at a time when he is sanctioned by the U.S. Fifthly, ‘de-oligarchization’ is impossible without reducing Ukraine’s huge shadow economy, reducing widespread tax avoidance among Ukrainian citizens and fighting deep levels of corruption in the judiciary.

If President Zelenskyy wants Ukrainians and Washington to treat his ‘de-oligarchization’ seriously and not as another round of election populism he should start at home by following the U.S. in sanctioning Kolomoysky. ‘De-oligarchization’ will not be treated as anything other than populism while Kolomoysky remains untouchable in Ukraine.