China's J-10 Fighter: How Would it Fare Against America's Best Jets? 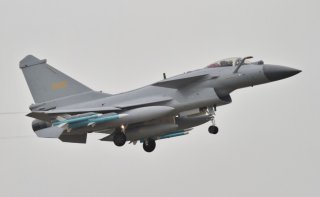 Here's What You Need to Remember: The latest version of the jet is the J-10C, which made first flight in December 2013. Deliveries began in late 2016 and the new version is thought to be in service as of July 2017. The new J-10C incorporates an indigenously-built active electronically scanned array (AESA) fire-control radar and uses more composite materials in its airframe. However, it is possible that the jet will be further refined with the addition of a Shenyang-Liming WS-10 Taihang turbofan engine with a vectored thrust nozzle.

The Chengdu J-10 Firebird was the People’s Republic of China’s first attempt to develop a fourth generation fighter comparable to the American Boeing F-15C Eagle and Lockheed Martin F-16 Falcon as well as the Soviet Sukhoi Su-27 Flanker and the Mikoyan MiG-29 Fulcrum.

While initially envisioned as a pure air superiority fighter when development started in 1988 as a direct counter to the Su-27 and MiG-29, the 1991 collapse of the Soviet Union meant that Beijing could retool the J-10 into a multirole fighter that would complement the People’s Liberation Army Air Force’s  (PLAAF) growing fleet of Flanker derivatives—which a formerly adversarial—and impoverished—Russian Federation was more than willing to supply in exchange for hard currency. Indeed, while the J-10 has evolved over the years into a formidable warplane as new technologies are added to the jet, various unlicensed Chinese copies of the Su-27 and Su-30 including the J-11B, J-15 and the J-16 among others have largely overshadowed the Firebird.

Nonetheless, since 2004 when the Firebird entered service, the J-10 has made up an important part of the PLAAF ‘s order of battle with roughly 350 jets in service—providing China with a relatively low cost and capable fourth-generation strike fighter. Indeed, before the service embarked on an upgrade program for its Boeing F-15C fleet, the United States Air Force had considered the most modern fielded versions of the J-10 to be a potent threat to the Eagle. The Chinese aircraft combines an advanced airframe design—largely derived from the Israeli Lavi fighter—with advanced avionics. And over the years, Beijing has upgraded—and indeed continues—to upgrade the J-10 with advanced new features.

The initial J-10A version was a fairly basic fourth-generation fighter, however, its cockpit was remarkable since it featured an all-glass design that was somewhat more advanced than its Russian counterparts. In terms of avionics, the jet was fitted with the Type 1473H pulse-Doppler fire control radar and could carry pods including the Type Hongguang-I infrared search and track pod, BM/KG300G self-protection jamming pod, KZ900 electronic reconnaissance pod, Blue Sky navigation/attack pod and the FILAT (Forward-looking Infra-red Laser Attack Targeting) pod. The jet is also capable of carrying a range of Russian and Chinese radar and infrared guided air-to-air missiles as well as a host of precision-guided weapons. The jet uses a 28,000lbs thrust Salyut AL-31FN as its powerplant.

The more advanced J-10B, features a host of improvements, first flew in December 2008 and entered service in 2014. The most immediately apparent modification is the addition of a diverterless supersonic inlet, which should help to reduce the aircraft’s radar cross section while reducing weight and complexity—but at the price of some degraded high speed performance. The J-10B incorporates an infrared search and track (IRST) with an added laser rangefinder plus an indigenous passive electronically scanned array (PESA) fire-control radar that is allegedly capable of engaging 4 targets simultaneously. It also incorporates a much more capable electronic warfare and countermeasures (EW/ECM) suite.

The latest version of the jet is the J-10C, which made first flight in December 2013. Deliveries began in late 2016 and the new version is thought to be in service as of July 2017. The new J-10C incorporates an indigenously-built active electronically scanned array (AESA) fire-control radar and uses more composite materials in its airframe. However, it is possible that the jet will be further refined with the addition of a Shenyang-Liming WS-10 Taihang turbofan engine with a vectored thrust nozzle.

Overall, the J-10 is a competent design that offers good capability at modest prices. More importantly, it is an indigenous aircraft where China more or less developed most of the intellectual property itself. As such, the Chinese have gained valuable experience in developing fighter aircraft, which they have applied to creating the Chengdu J-20 stealth fighter and other follow-on jets. Moreover, the J-10 is an aircraft that can be produced in numbers, giving the PLAAF volume. The jet, is therefore, a useful addition to the PLAAF fleet.