The Chinese Spring Offensives of 2020 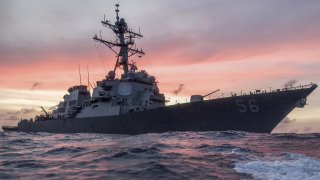 In 1918 the German Army unleashed a titanic series of spring offensives. Their goal: to crash through British and French lines in France before the United States could make its weight felt on the field of battle, putting victory forever out of reach. Things were as good for the Reich that spring as they were going to get. Germany had driven Russia out of the war the previous winter, freeing up troops from the East to swing to the West. Meanwhile, America was still gearing up for war.

Berlin perceived an opportunity to triumph—if it exploited this interlude of manpower and matériel superiority. Germany’s martial overseers could act now or resign themselves to defeat. The army had to strike hard and strike fast.

Now could be Xi Jinping’s now-or-never moment. The Chinese Communist Party (CCP) general secretary might see the pandemic now invading the West as an opportune time to settle scores around China’s periphery. U.S. leaders are consumed with managing disease outbreaks. President Donald Trump forecasts “a hell of a bad two weeks” coming up. U.S. military forces appear to be in disarray after coronavirus infested both aircraft carriers forward-deployed to the Western Pacific, stranding USS Theodore Roosevelt in Guam and Ronald Reagan in Japan. Indeed, the skipper of Theodore Roosevelt publicly implored the Pentagon to allow him to evacuate and quarantine his crew.

The pandemic, it seems, could both slow and enfeeble an American riposte to aggression against China’s Asian neighbors. Xi could view the public-health crisis as the CCP’s moment to conquer Taiwan, seize the Senkaku Islands, or consolidate “indisputable sovereignty” within the “nine-dashed line” that encloses the vast majority of South China Sea waters, islands and atolls, and skies. The People’s Liberation Army (PLA) could hope to spring a fait accompli on the United States and its allies, accomplishing its goals before they could intrude. Or it could duel weakened opponents should they summon up enough strength to intervene.

Strategic auguries, then, point to success for Beijing. Xi could act in the coming weeks if he believes he confronts a choice between acting now and forfeiting goals he has loudly, publicly, and repeatedly pledged to achieve. Making a promise in public and failing to keep it is hazardous for any leader. It’s doubly hazardous for the CCP supremo, who has vowed to make China’s “dream” of national rejuvenation come true. Regaining every inch of ground once ruled by imperial China is central to the dream he exhorts Chinese to embrace.

Miss an opportunity and China’s dream might never come true. And where would that leave Chinese Communist rulers, who already face a sullen populace?

Xi thus might conclude this is not just an opportune moment but his only moment to act. President Trump has been encouraging industry to divest from China and come home—a prospect made more likely by CCP threats to withhold vital pharmaceuticals during this time of trial. If Trump gets his way and America makes itself economically self-sufficient, transpacific trade will plummet to the detriment of China’s economic health. China, in other words, may never again possess the wherewithal to contemplate a major push in offshore waters. It does have the wherewithal now, having mounted an impressive military and naval buildup over the past two decades or thereabouts.

There’s a sound strategic logic to the idea of starting a fight at inauspicious times. In fact, strategic sage Carl von Clausewitz goes so far as to urge the weaker contender to pick a fight with the strong under some circumstances. Suppose, he writes, a “minor state is in conflict with a much more powerful one and expects its position to grow weaker every year,” he writes. And suppose “war is unavoidable.” In that case, the lesser antagonist should “make the most of its opportunities before its position gets still worse.” It should attack before the military balance deteriorates further, wresting such battlefield advantages from the foe as it can. While it can.

China is no minor state. It is a powerhouse competing on home ground against a stronger outsider. But the disparity actually makes Clausewitz’s advocacy of early combat harder to resist. China holds a better position than Clausewitz’s hypothetical weaker combatant and thus can hope to accomplish more. If Xi Jinping believes China is as powerful today as it will ever be; if he believes economic and military trendlines will soon turn against it; if he believes America and its allies are as weak as they ever will be; and if he believes the allies will rebound before long, then now constitutes a propitious moment for China to fulfill its dream of territorial unity. Its moment may never come again.

So much for why the CCP might act; how might it act? Xi & Co. entertain aspirations all along the mainland seaboard, from the Senkaku archipelago to the north to the Taiwan Strait at the midpoint to the Spratlys and Paracels to the south. Which object would Beijing make its chief priority, and where would it make its major push? In all likelihood, Taiwan would be the jewel. Subduing the island has been a constant in Chinese policy and strategy ever since the defeated Nationalists fled across the strait during the Chinese Civil War seven decades ago. Its vibrant democracy is a standing rebuke to mainland totalitarianism. Occupying it would let the PLA break through the first island chain, assuring surface and air traffic access from the China seas into the Western Pacific. And on and on.

These are compelling grounds to make Taiwan the top priority. Plus, one imagines Beijing is content that the trendlines are already running its way in the Senkakus and the South China Sea. Fishing craft and the China Coast Guard routinely lurk around the Senkaku islets. Indeed, over the past decade they have established a kind of joint administrative control of the archipelago alongside Japan. Beijing is competitive in that theater. Meanwhile, Chinese engineers have built and fortified islands in the South China Sea. China explores for undersea natural resources wherever it pleases, including in Vietnam’s exclusive economic zone. Xi has cozied up to the Philippines’ China-friendly president, Rodrigo Duterte. Beijing might even detach the Philippines from the architecture of American defense alliances in Asia—shattering a segment of the first island chain through deft diplomacy.

Best of all from Xi’s standpoint, Beijing has accomplished all of this without encountering effective pushback. The Senkakus and South China Sea, then, appear to be secondary theaters. They are well in hand where Taiwan is not. That makes it the prime target.

And yet. Let’s not discount the prospect that CCP magnates might try to solve all of their offshore problems at once. It has happened before. Imperial Japan tried to do it all in 1941 after squaring off against the United States. It struck near-simultaneous blows at Pearl Harbor and the Philippines that December, then ran amok throughout the Western Pacific until stopped at Midway in June 1942. The Imperial Japanese Navy even struck into the Indian Ocean, landing a hammer blow against Great Britain’s Royal Navy.

Why act so imprudently? Tokyo coveted big things leading up to Pearl Harbor, mainly economic self-sufficiency, and it was on a deadline. Its major oil supplier, the United States, had levied sanctions to punish aggression in Manchuria and China. Fuel supplies for imperial forces were tighter and tighter. Japan needed to win fast or be starved of oil. The United States, moreover, had launched itself into a massive naval and military buildup starting in 1940. By 1943, U.S. forces would be numerically and, increasingly, technologically overpowering. No longer would Japan be able to compete with genuine prospects of victory.

So Japan’s military rulers were in a hurry and acted while they could. And they thought they could do it all. They were wrong—but it took years of hardship, hundreds of thousands of lives, and untold investments of national treasure to prove them wrong. Clausewitz seemed to think the lesser opponent should take what it could from a stronger foe in a limited engagement. That’s the nature of fighting while outmatched. Trying to take everything from a stronger foe in a protracted engagement would be foolhardy. That logic of self-restraint was lost on Tokyo in 1941-1942.

Imperial Japan represents a cautionary tale for Communist China, for sure, but China is better situated to bid for it all today than Japan was back then. Japan ran wild; China’s major goals lie in waters adjoining its coasts or along the first island chain, physical space mostly within reach of shore-based PLA firepower. Beijing has forged distinct implements for each theater. The China Coast Guard and maritime militiamen embedded in the fishing fleet anchor CCP policies in the South China Sea and the waters around the Senkakus. In the meantime, heavy PLA forces would presumably bear the brunt of the fighting against Taiwan. These theaters, in other words, are not in zero-sum competition with one another for resources.