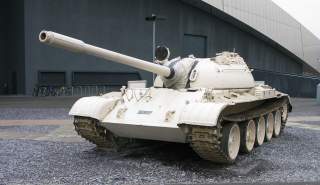 Key point: The most lethal weapons designed and fielded by both countries were thankfully never used in combat.

The intense military rivalry between the United States and the USSR created the impetus for rapid technological advances. Despite never being technically at war, the Cold War constantly pressured each side to create newer, more advanced weaponry at a scale approaching wartime progress.

The most lethal weapons designed and fielded by both countries were thankfully never used in combat. On the other hand, some of the lowest-tech weapons were widely used. This article will discuss both the lethal weapons used by both sides, both in theory and reality.

In real terms, the assault rifles of both countries were probably the most the most lethal weapons fielded by both sides. Given away to client states in the millions, the Soviet Union’s AK-47 and the American M-16 killed more people than the nuclear weapons owned by either side.

The AK-47, according to legend, was developed by tanker turned small arms developer Mikhail Kalashnikov as he recovered from his World War II injuries. The so-called “assault rifle” was built to fire the less powerful 7.62-by-39-millimeter from a compact, fully automatic design. A thirty-round magazine was a huge step up from the five-round internal magazine of wartime Moisin-Nagant rifles.

On Kalashnikov’s death in 2013, Russian state media announced that up to 100 million Kalashnikovs had been built since the gun’s introduction in 1947, seeing service in South America, Asia, Africa, and Europe.

The most exported tank of the Cold War, the Soviet T-55 is also one of the most recognizable. Introduced shortly after the end of World War II, the T-55 replaced the venerable T-34 (or T-85) tank as the mainstay of the Soviet armor corps.

The T-55 has served in numerous high-intensity conflicts, particularly the Arab-Israeli wars from 1967 to 1982, and with Angolan and Cuban mechanized forces in Southwest Africa. It was also used by the North Vietnamese Army against South Vietnamese forces and carried the victorious communist flag into Saigon in 1975.

The T-55 still thrives today, thanks to its virtues as a reliable tank with decent firepower. It thrives in low antiarmor threat environments where other tanks are not expected and provides infantry fire support.

The Joint Strike Fighter of its time, the F-4 Phantom II was a single airplane designed to serve both the U.S. Air Force and the U.S. Navy. A large, two-seat, twin engine airplane, the F-4 was designed for night and bad weather operations. It was also designed with a prodigious number of hard points for carrying weapons and fuel, giving it both firepower and range. The aircraft could carry a total of sixteen thousand pounds of fuel, bombs and missiles.

Designed and manufactured by McDonnell Douglas, the F-4 was used extensively by both services in the Vietnam War as an air superiority fighter, ground attack jet, and tactical bomber. It was also used by Israel and Iran in combat in the Middle East.

The SS-18 missile was the heaviest intercontinental ballistic missile fielded by either side during the Cold War. A two-stage, liquid-fueled missile, the SS-18 had a range of 9,400 miles, making it capable of striking any location in the United States.

By way of comparison, the bomb dropped on Hiroshima that killed approximately 135,000 people was about eighteen thousand tons of TNT—a peashooter by comparison.

The George Washington class was also nuclear-powered, giving them unlimited range. Indeed, the submarines were capable of staying underwater, creeping close to the Soviet Union, and then unleashing a combined 9.6 megatons of atomic firepower. This provided a second-strike capability nearly invulnerable once at sea, a powerful deterrent to surprise nuclear attack.