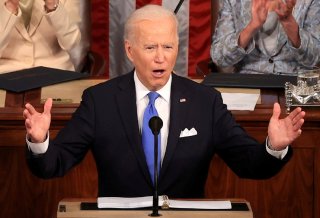 Huge economic growth reported in the first quarter was the idea behind the $1,400 stimulus checks distributed by the government as part of the American Rescue Plan. The Biden administration hoped that putting money in the hands of Americans would encourage spending, and therefore cause the economy to grow.

According to data released by the government Thursday, the stimulus appears to be working as intended.

The U.S. gross domestic product (GDP) grew at a 6.4 percent annual pace in the first quarter of 2021. According to MarketWatch, the growth was slightly less than the 6.5 percent predicted by economists.

The report itself credited the checks, in part, for the strong economic performance, much as was the case when retail sales jumped in March.

“The increase in first quarter GDP reflected the continued economic recovery, reopening of establishments, and continued government response related to the COVID-19 pandemic. In the first quarter, government assistance payments, such as direct economic impact payments, expanded unemployment benefits, and Paycheck Protection Program loans, were distributed to households and businesses through the Coronavirus Response and Relief Supplemental Appropriations Act and the American Rescue Plan Act,” the BEA report said.

The numbers would have been even better, MarketWatch said, had companies been able to keep up with demand.

“Low interest rates and government stimulus on a unprecedented scale have also push the economy into overdrive,” MarketWatch said. “Much of the stimulus has yet to be spent, what’s more, and the Biden administration is aiming to spend even more money.”

“This signals the economy is off and running and it will be a boom-like year,” Mark Zandi chief economist at Moody’s Analytics, told CNBC. “Obviously, the American consumer is powering the train and businesses are investing strongly.”

“With the elevated saving rate, households are still flush with cash and, now that restrictions are being eased as the vaccination program proves a success, that will allow them to boost spending on the worst-affected services, without needing to pull back too much on goods spending,” wrote Paul Ashworth, chief U.S. economist at Capital Economics, as cited by CNBC.

The Labor Department said in a report Thursday that 553,000 Americans filed jobless claims last week, which was the lowest number since the start of the pandemic but still above estimates, according to CNBC.