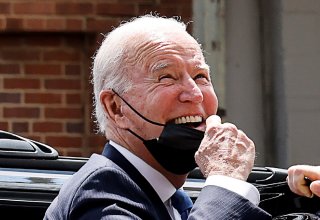 Congress approved President Joe Biden’s $1.9 trillion coronavirus relief package in March that set aside roughly $422 billion for the third round of stimulus payments. The IRS began sending out the $1,400 payments to eligible Americans shortly after, but nearly two months later, millions of people are still waiting for their check.

As of last week, the IRS has pumped out almost 91 percent of the federal aid allocated for the direct payments, which has been sent out by paper checks, direct deposits, and prepaid debit cards.

The agency has disbursed about 163 million payments, worth $384 billion, in seven batches which have varied in size each week.

The IRS’s most recent batch sent out nearly two million payments, which included more than 1.2 million payments that went toward individuals who had their third stimulus check based on 2019 tax returns but are now eligible for a new or larger payment due to their recently submitted 2020 tax returns.

Biden’s pandemic relief bill sent $1,400 stimulus payments to individuals with an adjusted gross income of up to $75,000 or joint filers with an income of up to $150,000. Eligible taxpayers who were alive as of Jan. 1, 2021 also qualify to receive a payment.

The agency has sent out direct relief to almost all eligible Americans who have already filed their 2020 tax returns. But individuals and joint filers who are still waiting for their federal aid are encouraged to file a tax return immediately, since the IRS might be basing their eligibility on a 2019 tax return.

The IRS is also pushing those who don’t normally file a tax return to do so in order to receive aid from the American Rescue Plan.

Other relief programs that individuals and families may still be waiting to receive are the earned income tax credits, enhanced child tax credits, 2020 Recovery Rebate or “plus-up” payments, all initiatives established under Biden’s rescue package.

But families will likely not see the enhanced child tax credit until July, when they will receive monthly cash payments of $250 to $300 for each eligible child. The president’s plan expanded the existing $2,000 annual child tax break to $3,600 for children under the age of 6 and $3,000 for children between the ages of 6 and 17.

The agency noted that anyone “who didn't get a first or second round Economic Impact Payment or got less than the full amounts may be eligible for the 2020 Recovery Rebate Credit, but they'll need to file a 2020 tax return.”