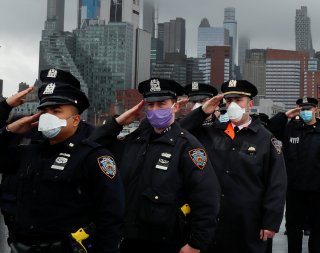 If before today’s grim unemployment numbers Federal Reserve Chair Jerome Powell had reason to worry about engineering a post-coronavirus U.S. economic recovery, he now has even more reason for concern.

Today’s unemployment numbers have to remind him that the U.S. economy has entered waters unchartered in the post-war period. It also has to be worrying him that we could soon be revisiting economic challenges similar to those last faced by the United States in the 1930s.

Not even during the Great Depression did unemployment increase at nearly as rapid a pace as it is now doing. Over the past six weeks, as the country has been locked down, a staggering 30 million or around one in five American workers has been forced to file for unemployment benefits. It is all too likely that before the lockdown is lifted, the U.S. unemployment rate will peak at well above 20 percent of the labor force.

Equally troubling is the likelihood that U.S. unemployment will remain unusually high for a prolonged period of time as the economy stages only a gradual recovery as it did after the 2008 Great Economic Recession. According to the Congressional Budget Office, by the end of 2021 U.S. unemployment is likely only to have declined to 10 percent.

With unemployment and excess capacity likely to remain unusually high for a prolonged period of time, we must now expect considerable downward pressure on wages and prices. Starting from a very low inflation rate, such downward pressure makes it all too likely that we will revisit the debt-deflation problems of the 1930s.

Deflation would be the last thing that Jerome Powell now needs as he tries to kick start the economy with lower after-inflation interest rates. Indeed, he will very likely find that his efforts at cutting interest rates will largely be negated by falling prices. He will also likely find, as Japan has found over the past two decades, that in a world of falling prices, consumers and corporations tend to delay spending in the hope that they will acquire their purchases at even lower prices in the future.

Deflation could constitute yet another headache for Mr. Powell in that it would exacerbate the country’s debt problem. If prices and incomes were to fall, both households and corporations would find it all the more difficult to meet their debt service obligations. That, in turn, would heighten the chances that we will soon see a wave of household and corporate bankruptcies that will put considerable strain on the U.S. financial system.

Needless to add, deflation will also make it difficult for the government to dig itself out of its deficit and debt problem. This is all the more to be regretted considering how parlous is the state of the country’s public finances. According to the Congressional Budget Office, the U.S. budget deficit is likely to reach a record 17 ½ percent of GDP in 2020 before receding to around 10 percent of GDP in 2021. That, in turn, will cause the public debt to rise to a troubling 108 percent of GDP by end-2021.

Hopefully, the Trump Administration and Congress will recognize the limits that the Federal Reserve faces today to get the U.S. economy moving again. In a world of falling prices and with interest rates already at their zero bounds, the Fed’s interest rate instrument has lost much of its potency. Meanwhile, if the Fed finds that companies and households are facing solvency as opposed to liquidity problems, there is not much that the Federal Reserve can do to prevent them from falling by increasing its lending.

All of this suggests that if in the months ahead a faltering U.S. economic recovery finds that it needs more policy support, such support must necessarily come from budget policy rather than from the Federal Reserve.