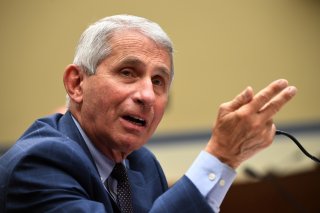 Ever since the arrival of coronavirus vaccines around a year ago, the United States has not instituted a vaccine mandate for airline flights. But now that the Omicron variant is here, and flights are being canceled by the hundreds, the nation’s leading infectious disease specialist is stating that it may be time.

According to the Associated Press, Dr. Anthony Fauci said in a TV interview this week that the United States should give consideration to such a move.

“When you make vaccination a requirement, that’s another incentive to get more people vaccinated,” Dr. Fauci said this week in an interview on MSNBC. “If you want to do that with domestic flights, I think that’s something that seriously should be considered.”

Such a mandate would likely encourage the so far reluctant to get the vaccine, while also making flights themselves safer. The United States does require most foreign nationals flying into the country to have full vaccination. The CDC recommends but does not require, travelers to take a COVID-19 test one to three days before a trip.

Fauci, while the White House chief medical adviser, does not have the power to make such a decision himself. The Biden Administration has so far not expressed support for such a mandate. Officials told the AP that such a mandate “could trigger a host of logistical and legal concerns.”

Fauci himself said in a later interview with CNN that “I don't think people should expect that we're going to have a requirement in domestic flights for people to be vaccinated.”

It represents a vocal public disagreement between Dr. Fauci and the administration he serves, although it’s not nearly as bitter or personal a dispute as the ones that frequently took place while Fauci was serving under former President Donald Trump. Trump on one occasion shared a tweet calling for Fauci’s firing.

CNN looked this week at the logistical hurdles in the way of requiring vaccination in order to fly. Epidemiologist Ali Mokdad, a professor of health metrics sciences at the Institute for Health Metrics and Evaluation at the University of Washington, recommended such a mandate be brought into place.

“The only way to protect our industries, our work and our economy is to mandate vaccines on airplanes and schools, etc.,” he said. He went on to praise the federal government for doing the right thing, despite often doing it too late.