Anthony Fauci: ‘Serious Threats’ Have Been Made Against Him and His Family 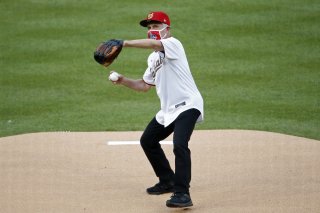 White House coronavirus advisor Dr. Anthony Fauci said on Friday that he and his family have received “serious threats” from people who are unhappy with his advice during the ongoing pandemic.

“There are people who get really angry at thinking I’m interfering with their life because I’m pushing a public health agenda,” Fauci, the director of the National Institute of Allergy and Infectious Diseases for more than three decades, said during a podcast interview with CNN commentator David Axelrod.

“The kind of not only hate mail but actual serious threats against me are not good.”

Fauci, who threw out the ceremonial first pitch before the Washington Nationals’ season opener on Thursday night, admitted that he and his family have been assigned a security detail. In April, the Department of Justice confirmed that federal officials were ramping up security for the infectious disease expert.

“It’s tough,” he said. “Serious threats against me, against my wife, against my daughters. I mean, really? Is this the United States of America? But it’s real. It really is real.”

Fauci revealed that he also received threats decades ago when he was working on finding treatments for HIV/AIDS.

“I’ve seen a side of society that I guess is understandable, but it’s a little bit disturbing,” he said.

“You know, back in the days of HIV when I was being criticized with some hate mail, it was more, you know, people calling me a gay-lover and ‘What the hell are you wasting a lot of time on that?’”

He later called the politicization of the coronavirus pandemic “a reflection of the divisiveness in our society at the political level.”

More than 4.1 million people in the U.S. have been infected with the coronavirus and about 145,000 have died, according to the latest data from Johns Hopkins University.

Fauci has openly opposed President Donald Trump in recommending school closures, state lockdowns and the use of face masks and coverings in public areas where social distancing is difficult.

During an interview earlier this month with Fox News, Trump said: “Dr. Fauci’s a nice man, but he’s made a lot of mistakes.”

There are now more than 15.6 million confirmed cases of coronavirus worldwide, including at least 638,000 deaths.