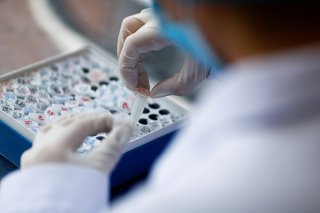 China’s alleged attempt to purloin or disrupt a vaccine in the middle of a life-or-death struggle with a pandemic is a sad commentary on the state of major power relations.  But not to be lost among the headlines about the FBI and the Department of Homeland Security warning that China and others may be tampering with the US public health system is that Asia is increasingly at the center of cyber and information warfare.

China’s apparent attempt to pull off a cyber heist of critical medical and laboratory data occurs against the backdrop of dueling narratives about the origins and handling of COVID-19. These two issues highlight Asia’s new era of cyber and information warfare.

The Asia-Pacific region is now the primary theater for a cyber competition that is flaring up in public because of the coronavirus.  Before the pandemic, regional powers were already furtively caught up in a maturing cyber arms race that appeared muted because of the opaque nature of the domain.  However, faced with a genuine national security health emergency, leaders are demonstrating some of their hidden digital assets and operations as they fight to shape the narrative and be first to conquer the coronavirus.

Influence operations and cyber data theft and manipulation are the two key facets of Asia’s heightened contest in the global infosphere.  China and the United States are principal but by no means exclusive protagonists in this match.  North Korea, Russia, and Iran are predictably active in cyber operations.  But South Korea, Japan, Singapore, and Australia are also on the cyber front lines, as well as, more surprisingly, Vietnam.

In recent weeks, the escalation of the war of words and electrons between China and the world has been unmistakable.  Through information warfare and carefully constructed narratives, China, the United States, and other Asian-Pacific state actors are attempting to portray themselves as technically competent, transparent, and forward-looking leaders.  They are also practicing damage control by touting bold decisions and humanitarian gestures.

But states in Asia and elsewhere are also focused on the theft of online intellectual property, including propriety data related to the search for life-saving medicines and an effective vaccine.

For China and the United States, the geopolitical dimension of the competition to be first with a vaccine is something in between an Olympic and a Cold War competition.  Leaders in Beijing feel China would lose face if the People’s Liberation Army virologists were not the first to develop a vaccine.  Meanwhile, US leaders face similar pressure, as shown by a recent headline in the Wall Street Journal that read: “America Needs to Win the Coronavirus Vaccine Race.” No wonder some say the race for a coronavirus vaccine is akin to “this century’s space race.”

While in theory, major-power cooperation might produce a draw, if not a win-win scenario, that could be homespun and embellished for domestic and foreign audiences.  The resurgence of great-power competition and nationalism have cultivated a zero-sum mentality that influences decisions even on global public health issues.  That zero-sum mentality explains China’s attempts to suppress derogatory information, influence the World Health Organization, delay the release of genome information that could help other states develop COVID-19 treatments and vaccines, and wage offensive propaganda and “mask diplomacy” campaigns.

Consider China berating New Zealand for supporting Taiwan’s bid to observe the World Health Assembly, despite the obvious global public good of having Taiwan participate.  Think about China’s 10-day push to test all 11 million people in Wuhan.  These incidents appear to be more about winning the battle for domestic and foreign hearts and minds, than about prudent public health policies and crisis management.  With life and death hanging in the balance, this is more than mere public relations in the digital age.

In some cases, Beijing is not only promoting its own image, but actively sabotaging others. For example, some hacking aims to disrupt and reinforce doubt about an actor’s ability to function effectively to counter the virus.  China’s diplomats have promoted conspiracy theories that the US military sent the virus to China. A China-linked bot network targeting Serbian social media spread false claims that the European Union was neglecting Serbia and not providing significant aid. A new RAND study refers to this category of mischief in the infosphere as “virtual societal warfare.”

The deadly pandemic seems to be pulling together the threads of information and cyber operations.

The Trump administration’s warning suggests that Chinese and Iranian hackers targeted US medical research entities in a manner that could both lead to data theft or perhaps even worse, data destruction.  That is, if Beijing prizes being the first country to declare a successful vaccine, thereby boosting its reputation while undermining America’s.  While representing a significant escalation of its cyber capabilities, Beijing operatives would have shown how to tether information and cyber operations for national security gains.

But China appears to be both a hacker and a hackee.  At least, reports out of Australia and Vietnam suggest China has been the victim of medical hacking, presumably from actors trying to determine the origins and true impact of the virus on Wuhan, the original epicenter of COVID-19.  China’s coronavirus data are also leaking, perhaps from sources within China.

Meanwhile, North Korea, which has increasingly turned to cybercrime as a means of keeping its sanctioned economy afloat, may be stepping up its efforts to steal cryptocurrency amid the pandemic.  Indeed, the contest is not limited to Asia.  After all, similar reports about hacking in Europe and intrusions by Iran and potentially Russia point to a worldwide phenomenon of rising cyberattacks as a result of the pandemic.  Yet China and other regional countries appear now to be the main drivers in information and cyber operations.

While Asian nations have been ramping up cyber defense and offense capabilities over the past decade or more, the pandemic inflamed them like an autoimmune disorder under stress.  The China-US competition over narratives and data is likely to exacerbate entrenched regional disputes over territory, as well as US-China tensions over high technology and trade.

Short of shots being fired, the growing cyber competition centered on Asia is a rare window into how future conflicts could begin and unfold.  How these and other conflicts end, however, remains an even murkier business.

Dr. Patrick M. Cronin is the Asia-Pacific Security Chair at the Hudson Institute