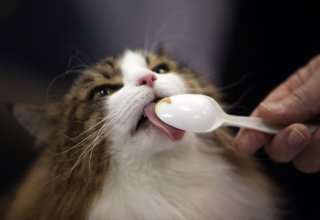 Two cats in New York state have become the first pets in the United States to test positive for the novel coronavirus, federal officials announced.

The two felines, from separate areas in New York state, only showcased minor respiratory symptoms and are expected to make full recoveries, according to a release from the U.S. Department of Agriculture and the U.S. Centers for Disease Control and Prevention.

The cats are thought to have contracted COVID-19 from people within their households or neighborhoods. The agencies, though, stressed that there is no direct evidence that pets play a role in spreading the virus.

One of the cats was taken in for testing after its owner had already tested positive for COVID-19. The other cat, however, lived in a home where no one had a confirmed case of the coronavirus.

Health officials are speculating that the animal may have contracted the virus from a family member who was unaware he or she carried the virus or through direct contact with an infected individual outside the home.

The CDC is recommending that people prevent their pets from interacting with people or animals outside their homes. If they are outside, the pets should maintain at least a 6-foot distance.

COVID-19 testing for pets isn’t recommended unless an animal has shown symptoms and has been directly exposed to an individual infected with the coronavirus. Veterinarians who strongly believe that testing is necessary are supposed to contact state officials to decide.

Behravesh noted that the animal tests conducted at veterinary labs use different chemicals than the human tests, which have been known to be in short supply during this pandemic.

Scientists are trying to work quickly to better understand the potential for transmission to animals in home and farm settings. So far, it doesn’t appear that livestock and poultry are susceptible.

According to the American Veterinary Medical Foundation, there have been a handful of reports outside U.S. borders of pets testing positive for the coronavirus, most notably two dogs and a cat in Hong Kong. Several tigers and lions in zoos have also been infected, but they are now recovering.