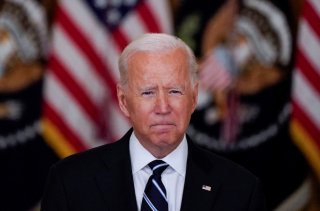 Top health officials in President Joe Biden’s administration are believed to be planning to announce that most Americans should get a coronavirus booster shot eight months after becoming fully vaccinated.

The plan, which could be announced as soon as this week, would involve administering third shots beginning in September or October in an effort to contain the highly transmissible Delta variant that continues to drive new coronavirus cases across the country.

According to the latest data compiled by the U.S. Centers for Disease Control and Prevention (CDC), the United States is witnessing nearly 130,000 new cases per day, which is more than 700 percent higher compared to the beginning of July.

Earlier this week, Pfizer and BioNTech confirmed that they had submitted initial data to the U.S. Food and Drug Administration (FDA) that support the use of coronavirus booster shots.

“Given the high levels of immune responses observed, a booster dose given within six to twelve months after the primary vaccination schedule may help maintain a high level of protection against COVID-19,” the company said in a statement.

The latest estimates indicate that a little more than 50 percent of Americans are fully vaccinated against the coronavirus. While vaccinations have been largely increasing in recent weeks, millions of Americans remain firmly opposed to getting inoculated.

On Tuesday, the National Institutes of Health (NIH), the FDA, and the CDC released a joint statement confirming that they have a data-driven process in place to determine when booster shots would be necessary.

“This process takes into account laboratory data, clinical trial data, and cohort data—which can include data from specific pharmaceutical companies, but does not rely on those data exclusively,” the agencies said via a joint statement.

“We continue to review any new data as it becomes available and will keep the public informed,” they said in the statement.

Dr. Francis Collins, the director of the NIH, has suggested that new data out of Israel—which showed a reduction in the effectiveness of Pfizer’s vaccine against severe illness among seniors who were fully vaccinated in January or February—is forcing U.S. health leaders to rethink their position on booster shots.

“The people who got immunized in January are the ones that are now having more breakthrough cases,” Collins said during an interview on The Hugh Hewitt Show.

“Mostly, of course, these are symptomatic, but not serious. But you’re starting to see a little bit of a trend toward some of those requiring hospitalization,” he added.

Over the weekend on Fox News Sunday, Collins doubled down on his advice that unvaccinated Americans need to quickly take action.

“The big message right now this morning (is) for the people who aren’t vaccinated, this is the moment to absolutely get off the fence and take care of this. . . . It’s looking for you,” he warned.