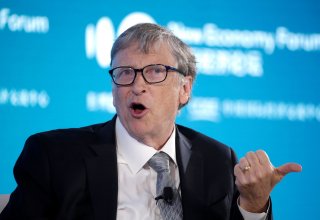 Billionaire philanthropist Bill Gates on Wednesday, denied conspiracy theories that point toward the Microsoft co-founder seeking to use coronavirus vaccines to implant tracking devices in the population.

Gates addressed a poll from a Yahoo News/YouGov survey that found 28% of American adults actually believe theories claiming that he would implant microchips in billions of people to monitor their movements.

“We need to get the truth out there,” Gates, the co-chair of the Bill and Melinda Gates Foundation that has donated millions of dollars to coronavirus vaccine research, said during an interview on CBS News.

“I hope it’ll die down as people get the facts.”

There are currently no FDA-approved drugs or vaccines for the novel coronavirus, which has infected about 14.7 million people worldwide and is responsible for at least 617,000 deaths, according to the latest data compiled by Johns Hopkins University.

The World Health Organization has said that more than a hundred vaccines are currently under development—with twenty-three of them already advancing to human trials.

In February, the Bill and Melinda Gates Foundation donated $100 million to coronavirus vaccine research and treatment efforts. Then just last month, the foundation pledged an additional $1.6 billion to the Gavi vaccine alliance, an organization that aims to immunize millions of children worldwide amid the pandemic.

“We want to make sure we don’t have people dying just because they don’t have access to the vaccine,” Gates said.

Gates, who has been warning about the threat of a global pandemic since 2015, also noted that the potential coronavirus vaccine would likely require two doses rather than one, which could further limit the number of people who can have access to it.

“None of the vaccines at this point appear like they’ll work with a single dose,” Gates said. “That was the hope at the very beginning.”

When asked if the vaccine will be safe, Gates said he places his trust in the decision-making process of the FDA.

“The FDA, not being pressured, will look hard at that,” Gates said of the vaccine’s potential side effects.

“The FDA is the gold standard of regulators, and their current guidance on this—if they stick with that—is very, very appropriate.”