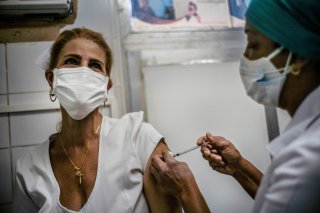 The Omicron variant of the coronavirus has been public knowledge for just over a week, but it’s already set off panic around the world, especially from very volatile markets.

Earlier this week, comments from Moderna CEO Stéphane Bancel that existing vaccines may not work as well against the new variant.

"There is no world, I think, where [the effectiveness] is the same level ... we had with [the] Delta [variant],” Bancel told the Financial Times Tuesday. I think it's going to be a material drop… "I just don't know how much because we need to wait for the data. But all the scientists I've talked to  . .  . are like, 'This is not going to be good.’”

Those quotes seemingly caused markets to plunge earlier in the week.

However, in newly published remarks, the head of one of the other companies involved with early vaccine success sounded much more positive.

Ugur Sahin is the CEO and cofounder of BioNTech, the German company that teamed up with Pfizer to make the first MRNA vaccine to be approved in the United States. He gave an interview this week in which he struck a much less ominous tone than his counterpart.

“I am personally not scared about the situation. We expected such a variant to come,” Sahin told The Economist in an interview published earlier this week. In the interview, he also called for everyone to be vaccinated, and for those already vaccinated to receive boosters.

BioNTech is currently researching whether an additional booster to deal with Omicron specifically will be necessary. That entails testing the existing BioNTech formula inside a lab in order to determine how effective the current vaccine is against the new variant. There is the possibility that the vaccine will need to be updated every year or two and that people will need to receive additional vaccines.

Sahin said in the interview that it’s likely the virus won’t stop mutating, and therefore it is likely necessary for vaccines to be updated frequently. Also, it is likely that any new version of the vaccine will arrive before next spring—at which point a new surge may have already ended.

Despite the optimism, Sahin warned in the article that the virus is unlikely to go away completely anytime soon, and that “there will be more variants than letters in the Greek alphabet.”

On Thursday, President Joe Biden announced his plan for combating the coronavirus this winter, which includes a new campaign for boosters, a family vaccination clinic, more availability of home coronavirus testing kits, and an increase in Surge Response Teams.

“It doesn’t include shutdowns or lockdowns but widespread vaccinations and boosters and testing and a lot more,” the president said.