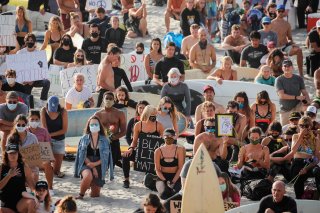 The United States had made great progress in suppressing the spread of SARS-CoV-2, the virus causing the COVID-19 pandemic.

Unfortunately, by mid-June, the number of new cases began to surge, and now daily incidence of COVID-19 cases has far exceeded the confirmed daily incidence during the early peak of the pandemic.

There are several states that are nexuses of the current rush of cases. Much of the media attention has been devoted to Florida and to Texas. Both states have been criticized for reopening too soon, but one state cannot be criticized for loosening restrictions too soon.

California has been cautious in reopening and has maintained many of its mitigation measures during this time. In the time that Texas was well into its third phase of reopening, California had only begun moving into its second, yet is seeing a similar surge in cases.

The facts suggest that the recent surge is the result of an uncooperative public more than a failure of reopening.

California has been slow and deliberate in loosening restrictions on a county-by-county basis. For instance, some dine-in restaurants have been opened, provided establishments can meet certain guidelines, but hair and nail salons, public events, and spectator sports remain closed.

California has imposed a statewide mask requirement since June 18. Furthermore, Gov. Gavin Newsom is adamant on waiting for a vaccine before normal life can resume.

With such a focus on caution, why has California seen such a rise in cases?

Newsom recently blamed it on the “young invincibles,” young adults who are not complying well with disease precautions. To that end, Newsom has ordered the closing of bars and indoor areas of restaurants in many counties, including in Los Angeles, Orange, and Sacramento counties.

Bars and pubs offer an environment that is particularly conducive to transmitting respiratory diseases as patrons cluster together at the bar shouting their drink orders over the din of the crowd and, typically, loud music.

Anecdotally, many bars and restaurants in California have not been complying with occupancy guidelines, so it would be unsurprising if many of the new cases can be linked back to such establishments.

Also anecdotally, many Americans simply do not know how to wear a mask properly—for instance, by leaving their noses exposed or pulling their masks down to talk with others, thereby negating any benefit a mask might have.

It’s also impossible to ignore that this surge in new COVID-19 cases began in the middle of June, a rather eventful month.

At least one of the protest marches following the killing of George Floyd was attended by an estimated 500-1,000 people. However, the protests and riots occurred in many California cities, and contrary to the stated aims of public health officials during an active pandemic, many lawmakers encouraged participation.

In fact, Los Angeles Mayor Eric Garcetti attended one of the protests himself and neglected to wear a mask. Garcetti would later concede that the protests were very likely linked to a large number of new cases.

From poor compliance to massive protests, many of the factors leading up to the surge in new cases were likely independent of reopening efforts, or of any policy aimed at mitigating the spread of COVID-19.

When the fervor following Floyd’s death reached a fever pitch, it was unlikely that the massive crowds would cooperate with social distancing and mitigation measures.

That said, if policymakers prioritized public health and suppressing the pandemic, they should not have encouraged protesting.

The good news is that bar patrons and protesters are typically much younger than the population at high risk for mortality or severe disease due to COVID-19. Between June 18 and July 7, California added more than 110,000 new cases, which represented a 72% increase.

The majority of cases are among people between 18 and 49 years of age, while the vast majority of mortality was among those 65 and older. The mortality rate currently remains low, and even though we expect mortality to lag cases, enough time has passed that we have not seen the expected rise in mortality.

There’s still time for that to change, but hopefully, a corresponding surge in deaths does not materialize.

California, like other states, is reacting to changing facts on the ground. The events of the past month have been extraordinary, but moving forward, all of us must continue to take the pandemic seriously while balancing the need to resume normal American life to the extent possible.

The increase in new cases is concerning—no matter the state—but we must temper our evaluation of the situation by relative risks to the younger population, who are less vulnerable to the severe disease manifestations.

There are reasons for optimism that, despite the large number of cases, we likely will not see a return to the dire situation that characterized the early stages of the pandemic.