Can Pfizer Stand Up to the Omicron Variant? 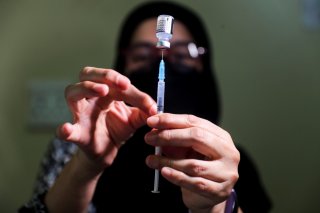 Ever since the Omicron variant of the coronavirus appeared for the first time the week of Thanksgiving, researchers, as well as the general public, have been wondering whether the variant has the ability to resist existing vaccines.

One study, albeit an early one, indicates that is indeed the case.

According to CNBC, an early preprint study out of South Africa, from the Africa Health Research Institute, finds a “41-fold drop” in antibodies’ ability to “neutralize” the new variant, compared to the original coronavirus, among subjects who received the Pfizer/BioNTech vaccine.

The study is preliminary, based on very early data, and is not yet peer-reviewed. It also has a very small sample size, consisting of fourteen plasma samples from twelve vaccinated people.

“The results we present here with Omicron show much more extensive escape” than was the case with the previous variant, the study said, per CNBC. “Previous infection, followed by vaccination or booster is likely to increase the neutralization level and likely confer protection from severe disease in Omicron infection.

Dr. Paul Offit, professor of pediatrics at the Division of Infectious Disease at Children’s Hospital of Philadelphia, told CNBC that it appears the Omicron variant will lead to more mild infections for the fully vaccinated.

While it remains very early in the life of the new variant, early indications are that the Omicron spreads faster than earlier variants, but doesn’t lead to illness that’s as severe, especially in vaccinated people.

Meanwhile, the CDC said Tuesday, per NPR, that cases of Omicron have been reported in 50 different countries, as well as 19 states- both numbers that the CDC expect to get larger. She added that at least in the U.S. the Delta variant remains the dominant one.

“While we are still working to understand the severity of omicron as well as how it responds to therapeutics and vaccines, we anticipate that all of the same measures will at least, in part, provide some protection against omicron,” the CDC’s director, Rochelle Walensky, said Tuesday.

On the same day, Dr. Anthony Fauci said that data will be available, likely by next week, in terms of how well vaccines hold up against the new variant. He added that while early indications out of South Africa are that the disease is less severe than past variants, not much time has passed, while many of those infected so far in that country are younger individuals.