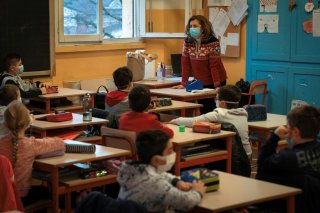 Vaccinating teachers should not be seen as a “prerequisite” for the safe reopening of school classrooms, according to the U.S. Centers for Disease Control and Prevention Director Dr. Rochelle Walensky.

“There is increasing data to suggest that schools can safely reopen and that safe reopening does not suggest that teachers need to be vaccinated,” she told reporters on Wednesday during a White House news briefing on Covid-19.

“Vaccinations of teachers is not a prerequisite for safely reopening schools.”

However, during a later press briefing, White House press secretary Jen Psaki appeared not to side with Walensky’s comments, saying that they were not “official guidance” from the health agency.

Walensky would say “that they have not released their official guidance from the CDC yet on the vaccination of teachers and what would be needed to ensure the safe reopening of schools,” Psaki added.

“That means every school has the equipment and the resources to open safely,” he said during a news briefing. “Not just private schools or schools in wealthy areas—but all schools.”

Walensky’s comments came on the heels of a CDC article released last week that stated that there was “little evidence” of widespread coronavirus transmission in schools if proper precautions like universal masking, social distancing, and ensuring proper ventilation are taken.

In the Journal of the American Medical Association, the researchers admitted that there have been some reported cases of the coronavirus in schools, but they have not been major drivers of further transmission within the general public.

“As many schools have reopened for in-person instruction in some parts of the U.S. as well as internationally, school-related cases of COVID-19 have been reported, but there has been little evidence that schools have contributed meaningfully to increased community transmission,” they wrote.

The analysis tapped into extensive data from about ninety thousand students and staff in eleven school districts in North Carolina that were open for in-person learning for nine weeks. During that period, there were only thirty-two confirmed infections, along with zero cases of students transmitting the virus to staff.

Outside the classrooms, the report revealed that there were nearly eight hundred community-acquired infections over the same time frame.

“The preponderance of available evidence from the fall school semester has been reassuring insofar as the type of rapid spread that was frequently observed in congregate living facilities or high-density worksites has not been reported in education settings in schools,” the researchers wrote.