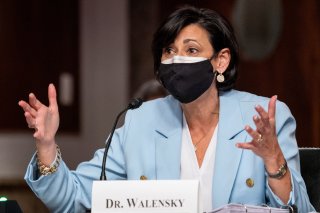 The CDC has often been accused of muddled and inconsistent messaging in recent months. In December, the CDC had to revise the percentage of cases in the country that were Omicron, from 73 percent all the way to 22.5 percent, in one week.

The agency has also been criticized for frequently changing guidance as aspects of the pandemic have changed, sometimes creating confusion.

CDC Director Dr. Rochelle Walensky was heavily criticized when she said on ABC’s Good Morning America that “the overwhelming number of deaths, over 75 percent, occurred in people who had at least four comorbidities. So really these are people who were unwell to begin with.”

Out of context, the quote sounds somewhat callous. Some even accused her of being insensitive to the disabled. But journalist James Surowiecki pointed out that there was much greater context for her quote.

Dr. Walensky was referring to a recent CDC study that was titled “Risk Factors for Severe COVID-19 Outcomes Among Persons Aged ≥18 Years Who Completed a Primary COVID-19 Vaccination Series.” The study covered the period from the launch of vaccines in late 2020 to last October, before the beginning of the Omicron wave in the United States.

“All persons with severe outcomes had at least one of these risk factors, and 77.8% of those who died had four or more risk factors,” the study said, adding that the number of such facilities was very small.

Even Surowiecki agreed that she hadn’t messaged very effectively.

“Walensky seems like a good person and she has great credentials as an infectious-disease doctor,” he tweeted. “But public messaging is a huge part of the CDC Director's job, especially during a pandemic. And she has been absolutely terrible at it.”

What’s ironic is that in earlier stages of the pandemic, it was often those who were skeptical about the seriousness of the virus who spoke of comorbidities, argued that coronavirus was not especially dangerous to those who did not have them, and used that as a reason to argue against pandemic mitigation measures. Others went even further and argued, falsely, that comorbidities were leading to deaths rather than the virus.