CDC: Next 3 Months May Be “Most Difficult in the Public Health History of This Nation” 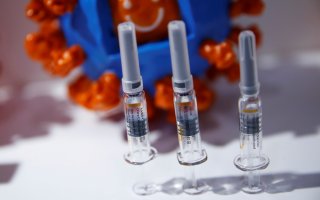 Dr. Robert Redfield, the director of the U.S. Centers for Disease Control and Prevention, has warned that the next several months of the coronavirus pandemic may see an excess of 200,000 deaths and will likely be among “the most difficult in the public health history of this nation.”

“So, we are at a very critical time right now about being able to maintain the resilience of our health-care system,” he said Wednesday during an event hosted by the U.S. Chamber of Commerce.

“The reality is December and January and February are going to be rough times. I actually believe they’re going to be the most difficult in the public health history of this nation, largely because of the stress that’s going to be put on our health-care system.”

Redfield noted that deaths caused by the virus are already surging in many regions of the country, which has been reporting roughly 1,500 to 2,500 deaths each day over the past week. A record 2,800 deaths were reported on Wednesday, according to data compiled by Johns Hopkins University.

“The mortality concerns are real,” he said. “And I do think unfortunately, before we see February, we could be close to 450,000 Americans (who) have died from this virus.”

More than 200,000 new cases were reported on Wednesday, the second-highest number registered since the pandemic started ten months ago, and about 100,200 people are currently receiving medical care at hospitals and clinics, many of which have warned that intensive-care unit beds, medical staff, and resources are stretched dangerously thin.

Redfield said that he is a proponent of a more targeted approach in containing the virus. He is on board with strategic closures of indoor bars and restaurants, but he does not believe that elementary and high schools need to be shuttered.

He also applauded the work of many universities and colleges that were able to mitigate any large-scale outbreaks via mask-wearing, surveillance and testing.

“I used to think that the most difficult group that we were going to have to help contain this was basically college students,” Redfield said.

“But what happened over the summer and the fall, is many of the colleges and universities really stepped up to develop comprehensive mitigation steps.”

He added that he is hopeful that when vaccines eventually roll out across the country, they will shorten the timeline of the pandemic. However, he predicted that public-health measures will still be necessary well into next year and that large gatherings won’t be permitted until fall.